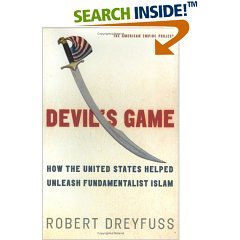 Of course I already knew that — in the words of Cheryl Benard (RAND expert, and Zalmay Khalilzadâ€™s wife) — Â in the ’80s the CIA, Saudis, and Pakistanis funded the “worst crazies” in Afghanistan and that, “the reason we donâ€™t have moderate leaders in Afghanistan today is because we let the nuts kill them all.”

But I didnâ€™t know that:

During the U.S.-Taliban era of cooperation from 1994 to 1998 â€¦ a key Unocal consultant was a University of Nebraska academic named Thomas Gouttierre, director of the Center for Afghanistan Studies there. During and after the Afghan jihad, Gouttierreâ€™s center secured more than $60 million in federal grants for “educational” programs in Afghanistan and Pakistan. Although the funding for Gouttierre’s work was funneled through the State Department’s Agency for International Development, the CIA was its sponsor. And it turned out that Gouttierre’s education program consisted of blatant Islamist propaganda, including the creation of childrenâ€™s textbooks in which young Afghanis were taught to count by enumerating dead Russian soldiers and adding up Kalashnikov rifles, all of it imbued with Islamic fundamentalist rhetoric. The Taliban liked Gouttierreâ€™s work so much that they continued to use the textbooks he created, and when a delegation of Taliban officials visited the United States in 1997 they made a special stop in Omaha to pay homage to Gouttierre. In 1999, another Taliban delegation, which included military commanders with ties to bin Laden and Al Qaeda, was escorted by Gouttierre on a tour of Mount Rushmore.

One thought on “Devil’s Game”