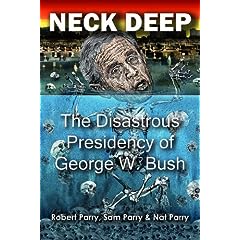 Investigative reporter Robert Parry, of ConsortiumNews.com and author of Neck Deep: The Disastrous Presidency of George W. Bush, discusses the Iran-Contra model for running the government, the failure of Colin Powell and allies to adequately stand up to Cheney and the neocons, the current state of the situation in Iraq, the rules of engagement, the second phase of the El Salvador option, the weakness of al Qaeda’s position in Iraq, the occupation’s benefit to them, the purpose behind the policy of backing the Ba’athists at the same time as the Maliki (Da’wa/SCIRI) government, the Bush administration’s bogus theory of unlimited power and technologies of control, the possibility that Iraqis may eventually tire of fighting and accept occupation, the neocons’ belief that it’s time to expand their triumph to Pakistan, the history of the mujahedeen’s CIA -backed war against the Russians in Afghanistan, the U.S. policy of ignoring Pakistan’s drive to obtain nuclear weapons in the 1980s, the impossibility of the Kagan/O’Hanlon plan for invasion, the neocon s’ history and mentality, their exaggeration of the Soviet threat as the USSR was falling apart, their taking of credit for it when it did and Adm. Fallon’s recent statement to the Financial Times against war with Iran.

Robert Parry, who broke many of the Iran-Contra stories in the 1980s for the Associated Press and Newsweek, runs ConsortiumNews.com, and is the author of Secrecy & Privilege: Rise of the Bush Dynasty from Watergate to Iraq and the brand new Neck Deep: The Disastrous Presidency of George W. Bush.