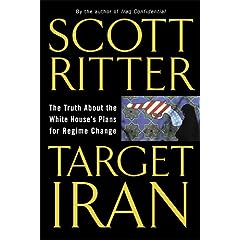 Scott Ritter, former U.S. Marine and UN weapons inspector and author of Target Iran: The Truth About the White House’s Plans for Regime Change, discusses the new Iran NIE, its confirmation of his long-held contention that Iran does not have a nuclear weapons program, the lack of hard evidence that they ever did, the illogic of the administration’s demands that Iraq and now Iran prove a negative, the mysterious origin of the “smoking laptop,” his patriotism, the state of Iran’s compliance with the IAEA, the possibility that the timing of the NIE’s release was a preemptive action against Mohamed ElBaradei’s upcoming report on the last outstanding questions, the lies claiming Iran is backing enemies of the U.S. in Iraq, the necessity of withdrawal, his case that the total debacle of the Iraqi occupation is the result of abject incompetence, the danger to U.S. troops in Iraq in the event of war with Iran, his admiration for Ron Paul and the need of the American people to destroy the careers of their warmonger representatives.

As a chief weapons inspector for the United Nations Special Commission in Iraq, Scott Ritter was labeled a hero by some, a maverick by others, and a spy by the Iraqi government. In charge of searching out weapons of mass destruction within Iraq, Ritter was on the front lines of the ongoing battle against arms proliferation. His experience in Iraq served as the basis for his book Endgame, which explored the shortcomings of American foreign policy in the Persian Gulf region and alternative approaches to handling the Iraqi crisis, and for Iraq Confidential, which detailed his seven year experience as a weapons inspector.

Scott Ritter has had an extensive and distinguished career in government service. He is an intelligence specialist with a 12-year career in the U.S. Marine Corps including assignments in the former Soviet Union and the Middle East. Rising to the rank of Major, Ritter spent several months of the Gulf War serving under General Norman Schwarzkopf with US Central Command headquarters in Saudi Arabia, where he played an instrumental role in formulating and implementing combat operations targeting Iraqi mobile missile launchers which threatened Israel.

In 1991, Ritter joined the United Nations weapons inspections team, or UNSCOM. He participated in 34 inspection missions, 14 of them as chief inspector. Ritter resigned from UNSCOM in August 1998, citing US interference in the work of the inspections.

He is the author of many books, including â€œIraq Confidential: The Untold Story of the Intelligence Conspiracy to Undermine the UN and Overthrow Saddam Husseinâ€ and most recently â€œTarget Iran: The Truth About the White Houseâ€™s Plans for Regime Change.â€ He lives in New York State. Ritter was born in Florida, and raised all over the world in a career military family. He is a graduate of Franklin and Marshall College, with a B.A. in Soviet History.