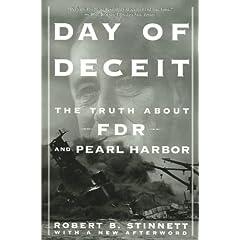 Robert B. Stinnett, World War II Pacific US Navy veteran and author of Day of Deceit: The Truth About FDR and Pearl Harbor, discusses the treason of Franklin Delano Roosevelt in approving a policy to force Japan into striking first and deliberately allowing their navy to strike ours at Pearl Harbor on December 7, 1941.