I am mystified why, after the uproar of over the 4 Americans killed last September in Benghazi, Libya, that there is so little outrage against Hillary Clinton over the 37 dead hostages in Algeria. Clinton was gung-ho on bombing Qadaffi out of power and she gloated after he was killed. The attack in Algeria was only possible because of sophisticated weaponry captured after the fall of the Libyan government. 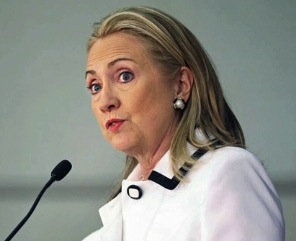 The Algerian government warned that this type of catastrophe would be inevitable if western powers intervened to overthrow the government of Libya. The New York Times noted a few days ago that the Algerian government’s attitude was “‘Please don’t intervene in Libya or you will create another Iraq on our border,’ said Geoff D. Porter, an Algeria expert and founder of North Africa Risk Consulting, which advises investors in the region. ‘And then, ‘Please don’t intervene in Mali or you will create a mess on our other border.’ But they were dismissed as nervous Nellies, and now Algeria says to the West: ‘Goddamn it, we told you so.’ ”

The result of the U.S. government’s intervention in Libya provided terrorist groups with more weapons than anything done by the two-bit offenders prosecuted for “material support of terrorism” in the past decade.

If Hillary Clinton cannot be indicted for “material support for terrorism,” then there is no justice….

62 thoughts on “In Algeria, More Blood on Hillary Clinton’s Head”