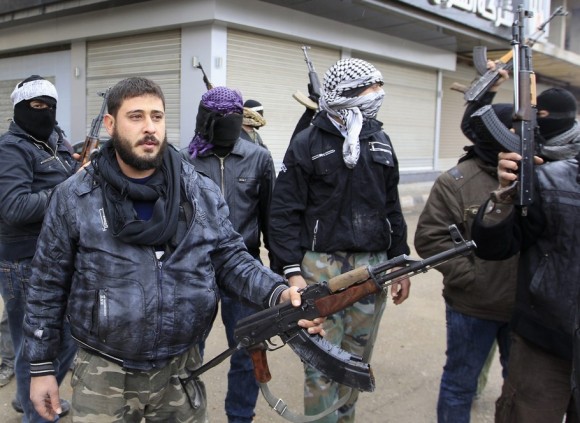 According to Angel Rabasa of the RAND Corp., we really need to start directly arming the Syrian rebels. How do we do that without bolstering the influence and lethality of extremist groups? Simple, he says: just “establish as soon as possible a task force to organize and supervise a train and equip program for the Syrian opposition forces.”

This sounds a lot like the supposed “vetting process” the U.S. has already been conducting while the CIA funnels weapons and aid from Saudi Arabia and Qatar to the rebel fighters.

Rabasa argues that the “train and equip task force” he was a part of for Bosnian fighters in the 1990s worked great, so it should work for Syria too. Well, that it worked great is arguable. But either way, I don’t think it’s arguable that the situation on the ground in Bosnia back then is at all comparable to the situation in Syria now.

The much vaunted “vetting process” consists of untrustworthy, third-party sources, and intelligence officials told the Washington Post and the Los Angeles Times as far back as a year ago that the truth is that the U.S. doesn’t know who is getting the money and weapons. That is to say, extremist groups linked to al-Qaeda have been getting the bulk of the aid.

According to Julien Barnes-Dacey and Daniel Levy, in a policy brief for the European Council on Foreign Relations, “it is unrealistic to expect that weapons can be guaranteed to end up in the hands of pro-Western actors. The U.S. and its allies were unable to achieve the micro-management of weapons control in Iraq and Afghanistan, even with a massive physical presence there, so it is unlikely that they will fare better doing this with a light footprint.”

Arming the rebels also creates “a real danger that these weapons could find their way into sectarian tensions in neighboring countries such as Lebanon and Iraq, supplying oxygen for the outbreak of an arc of sectarian conflict across the Levant.” Furthermore, it is likely cause the Assad regime to escalate violence, not the other way around.

With a bill authorizing the direct arming of Syrian rebels having already passed in Senate committee last week, it’s worrisome that advice like the kind offered by Rabasa might be followed by the Obama administration soon enough.

What kind of a Syria would we be promoting at that point?

According to reports, rebel-controlled areas in Syria – mostly dominated by Jabhat al-Nusra – have started to set up cruel sharia law systems. Armed militias rule these areas and dish out harsh punishments like extra-judicial executions and torture in the midst of frightened local residents.

So when militia leaders aren’t cutting out and eating the hearts of their enemies, they’re setting up the most extreme, doctrinal Sunni Islamic system (exported mostly from our Gulf allies, ironically) that is antithetical not just to the West but to freedom and democracy. And we want to send them arms?

53 thoughts on “Don’t Arm Syria’s Rebels: The ‘Vetting Process’ Is A Lie”