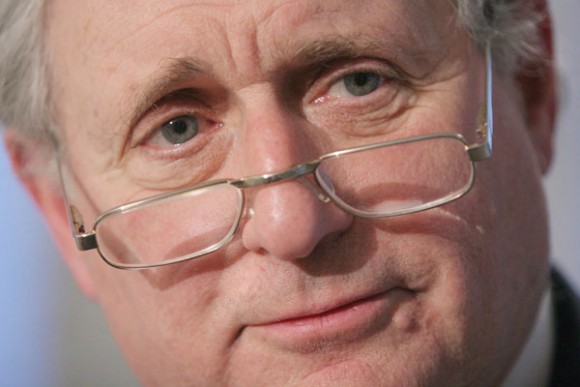 Robert Golan-Vilella at The National Interest notes that the government has a long list of dangerous enemies threatening America, all of whom fit under the language of the 2001 AUMF. But…that list is classified.

A number of senators have pledged in recent months to update the 2001 AUMF, written to authorize the use of force against those who perpetrated the 9/11 attacks, on the grounds that it’s too broad and serves as a blank check to wage unlimited war against whatever groups of terrorists the government can haphazardly claim qualify.

At a Senate hearing in May, writes Golan-Vilella, “Senator Carl Levin asked the administration to provide the committee with an ‘existing list of groups that are affiliated with al Qaeda’ and to let the committee know when changes are made to the list, and the witnesses promised to do so.”

And now, according to former Bush administration legal adviser Jack Goldsmith, the Defense Department has provided that list to Levin. But it’s secret, so Levin can’t make it public – presumably the purpose behind his request.

Back in May, I laid out the reasons the government wants to keep the AUMF intact:

First, the 2001 AUMF was a wet dream for the Masters of War in Washington who yearn for the day when any and all constraints on their actions in the realm of “national security” would evaporate. It carries with it immense, unchecked power that they are wont to preserve.

Second, in order to continue to carry out their Imperial Grand Strategy, they need to perpetuate a bogeyman. Without a monster to destroy, the public is much less apt to grant the state carte blanche to make war at will and keep it secret.

In an interview last year, former Secretary of State Colin Powell lamented, in a moment of candor, the fall of the Soviet Union. He described, admittedly with some irony, how apparently remorseful he and others in the military establishment were that America “lost our best enemy.” He said it was “one of the biggest challenges” he “ever faced” when the Cold War ended. That is, when we became much safer as opposed to when we might have faced a new enemy.

Absent the pretext of the Soviet threat, the thinking goes, how will we justify the expanding military and national security state? Powell says of the trumped up Soviet “threat” in no uncertain terms, “we’ve got a good thing going here.” The system – the “whole structure,” as he calls it, far from aiming to eliminate threats, “depended on there being a Soviet Union that might attack us.”

I believe these all still stand. But it is doubly Orwellian that even the names of the groups that allegedly pose a threat to us are classified. It makes the government’s eagerness to perpetuate false bogeymen all the more transparent.

63 thoughts on “Government: We’re At War With [Redacted]”