Over at the Christian Science Monitor, Nathan Gardels interviews Hans Blix, chief UN arms inspector for Iraq from 2000-2003 and former head of the IAEA, on the Obama administration’s plan for bombing Syria. 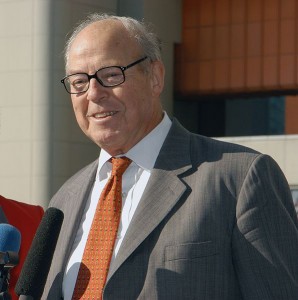 Blix, of course, has some experience dealing with American plans for war prior to UN confirmation of WMD allegations.

Nathan Gardels: Based on your experience, and what you’ve seen in recent days, do you believe the verdict of the Western intelligence agencies that Assad used chemical weapons is credible and reliable?

Hans Blix: The indications are certainly in the direction of the use of chemical weapons. Also, the circumstantial evidence points to the Assad regime carrying out the use of such weapons.

However, since the Western powers have asked for United Nations inspections – and Syria has accepted and inspectors have been put in the field – we all should wait to see the report of the inspectors before action is taken.

As we’ve seen before, the political dynamics are running ahead of due process.

Gardels: An echo of Iraq under President Bush?

Blix: In a way, yes. Then, too, the Americans and their allies asked for inspections for mass destruction weapons. Then, too, they said, “forget it, we have enough evidence on our own to act. We are the world police. Our publics are demanding immediate action!”

I do not go along with the statement by the US that “it is too late” for Syria now to cooperate. That is a poor excuse for taking military action.

Blix goes on to say that “this is about world police, not world law.”