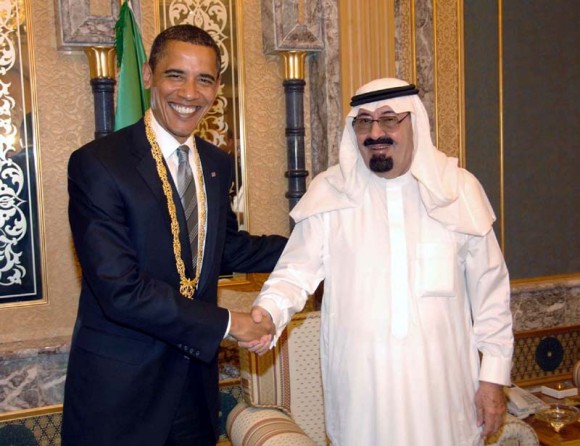 Much has been made recently of the apparent tension between the U.S. and its longtime ally, Saudi Arabia. The thinking essentially goes like this: Washington hasn’t sufficiently bowed to Saudi interests on issues like post-Mubarak Egypt, the Syrian civil war, and the diplomatic opening with Iran. The Saudis would have preferred the Obama administration to crush the Egyptian revolution at the outset, intervene in the Syrian civil war to unseat Bashar al-Assad, and to resist a diplomatic opening with Iran, none of which happened.

Saudi Arabia’s ambassador to Britain wrote an op-ed in the New York Times entitled “Saudi Arabia Will Go It Alone,” which seemed to reiterate the sentiment expressed by Saudi intelligence chief Bandar bin Sultan back in October when he talked of shifting away from the alliance with the U.S.

At Reuters, Ian Bremmer gives some details on the apparent strain in the U.S.-Saudi relationship.

First, America’s track record in the Middle East in recent years has sowed distrust. The relationship began to deteriorate with the United States’ initial response to the Arab Spring, where its perceived pro-democratic stance stood at odds with the Saudi ruling elite. After Washington stood behind the elections that installed a Muslim Brotherhood government in Egypt and then spoke out against the Egyptian army’s attempt to remove President Mohammad Morsi, the Saudi royals were left to wonder where Washington would stand if similar unrest broke out on their soil.

Second, while the oil trade has historically aligned U.S.-Saudi interests, the unconventional energy breakthrough in North America is calling this into question. The United States and Canada are utilizing hydraulic fracturing and horizontal drilling techniques, leading to a surge in domestic energy production. That development leaves America significantly less dependent on oil from the Middle East, and contributes to the U.S.’ shifting interests and increasing disengagement in the region. Not only does Saudi Arabia lose influence in Washington — many of the top American executives in the oil industry were their best conduits — but it also puts the Saudis on the wrong end of this long-term trend toward increasing global energy supply.

To say that oil is an integral part of Saudi Arabia’s economy is a gross understatement. Oil still accounts for 45 percent of Saudi GDP, 80 percent of budget revenue, and 90 percent of exports. In the months ahead, new oil supply is expected to outstrip new demand, largely on the back of improvements in output in Iraq and Libya. By the end of the first quarter of 2014, Saudi Arabia will likely have to reduce production to keep prices stable. And the trend toward more supply doesn’t take into account the potential for a comprehensive Iranian nuclear deal that would begin to ease sanctions and allow more Iranian crude to reach global markets.

It is this ongoing nuclear negotiation with Iran that poses the principal threat to an aligned United States and Saudi Arabia. An Iranian deal would undercut Saudi Arabia’s leadership over fellow Gulf States, as other Gulf Cooperation Council (GCC) members like Kuwait and the UAE would welcome resurgent trade with Iran. At the same time, Iran would emerge over the longer term as the chief competitor for influence across the broader region, serving as the nexus of Shi’ite power. The Saudis would find themselves most directly threatened by this Shi’ite resurgence within neighboring Bahrain, a majority Shi’ite state ruled by a Sunni regime that is backstopped by the Saudi royals.

The bottom line: the Saudis are actively competing with Iran for influence throughout the Middle East. That’s why the Saudis have the most at stake from any easing of sanctions on Iran, any normalization of relations with the West, or any nuclear breakthrough that gives Iran the ultimate security bargaining chip. The Saudis have reaped the benefits of an economically weak Iran — and they are not prepared to relinquish that advantage. Ultimately, any deal that exchanges Iranian economic security for delays in Iran’s nuclear program is a fundamental problem for Saudi Arabia — as is any failed deal that allows sanctions to unravel.

According to Bremmer, the reason the Saudis are unsatisfied can be summed up in two words: oil and democratization. Saudi Arabia wants to continue to use, as it has for decades, U.S. power to maintain its oil-centered geo-strategic predominance in the Middle East. Additionally, Saudi Arabia wants to be able to continue to count on U.S. backing in spite of the fact that it is one of the most backwards authoritarian regimes in the world. Somehow I can’t play the violin for them.

All that said, I think the talk of a lasting split between the U.S. and Saudi Arabia is hyperbolic, or at least premature. After all, Washington has firmly opposed the pro-democracy movement in neighboring Bahrain, which was in part a key Saudi interest. Saudi Arabia continues to be perceived as an important ally to Washington. And while the Obama administration may not obey Saudi demands to needlessly isolate Iran into perpetuity, that does not erase the myriad ways the U.S.-Saudi alliance is copacetic. Besides, another administration will come along soon that could easily become a slave to more traditional pressures.

15 thoughts on “Poor Saudi Arabia Unhappy With US Foreign Policy”