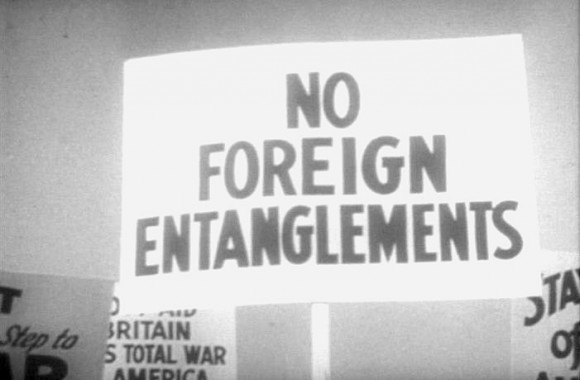 Historian Margaret MacMillan has published a lengthy report for the Brookings Institution exploring the “lessons of the Great War” and drawing parallels between the state of international affairs prior to WWI and today. In one section, she discusses “The Temptations of the Client State” and the problems that arise when great powers staunchly support smaller client states.

Great powers often face the dilemma that their very support for smaller ones encourages their clients to be reckless. And their clients often slip the leading strings of their patrons. The U.S. has funnelled huge amounts of money and equipment to Israel and Pakistan, for example, as China has done to North Korea, yet that has not given either the Americans or the Chinese commensurate influence over the policies of those countries. Israel, while hugely dependent on America, has sometimes tried to push Washington into taking pre-emptive military action. And Pakistan gave sanctuary to America’s global enemy number one, Osama bin Laden.

Moreover, alliances and friendships forged for defensive reasons or mutual advantage can look quite different from other perspectives. Before 1914 German statesmen assumed that the military pact between France and Russia was really designed to destroy Germany. Today Pakistan feels threatened by the links between India and Afghanistan, while the U.S. tends to see a challenge in China’s increasing influence in Central Asia, Africa, and Latin America.

Making matters worse, patron nations are reluctant to abandon their clients, no matter how far they have run amok and no matter what dangers they themselves are being led into, because to do so incurs the risk of making the greater power appear weak and indecisive.

This is perhaps the most important reason to avoid what 18th century American revolutionaries called “entangling alliances.” As George Washington famously said in his Farewell Address:

The Nation, which indulges towards another an habitual hatred, or an habitual fondness, is in some degree a slave. It is a slave to its animosity or to its affection, either of which is sufficient to lead it astray from its duty and its interest…Hence frequent collisions, obstinate, envenomed, and bloody contests.

As any college freshman can tell you, that is one of the key lessons of WWI: Entangling alliances on all sides created a snowball effect that made a relatively insignificant event, the assassination of the Austrian archduke, an immediate global conflagration.

The soundness of George Washington’s advice continues to be borne out today. America’s “habitual fondness” and established alliance with Saudi Arabia persists despite the blowback that U.S. support for Arab tyrannies elicits in the form of anti-American terrorism and despite Riyadh’s veritable opposition to key U.S. foreign policy initiatives, like a diplomatic opening with Iran. Saudi Arabia has suspicious ties to Islamic jihadist groups and supports extremists in Syria; a policy that has come close to propelling the U.S. into another reckless military quagmire in the Middle East. Members of the U.S. Senate have said that classified materials connect Saudi Arabia in some way to the 9/11 attacks – a connection that was perhaps overlooked because the U.S.-Saudi alliance is seen as sacrosanct in Washington, DC.

Our alliance with Israel also causes Washington to subordinate its own interests for another, also generates anti-American terrorism, and, as MacMillan explains, has sometimes “push[ed] Washington into taking pre-emptive military action.” As with the U.S.-Saudi alliance, the alliance with Israel has colored America’s perception of who the great enemy bogeymen in the Middle East are. Both have encouraged unnecessary American military engagements Iraq, Iran, Lebanon, and beyond.

America’s alliances in the Asia Pacific region, particularly with Japan, Taiwan, and the Philippines, have exacerbated tensions with China and quite obviously, as MacMillan predicts, encouraged recklessness. Where the region’s smaller states might otherwise back down to a rising regional great power like China, they have instead been bolstered by America’s security guarantees, standing up to China’s territorial and maritime claims in a way that makes conflict more likely. This system of alliances could easily turn a small clash in the Asia Pacific into a great power war, just as happened with WWI.

“America’s national-security elites act on the assumption that every nook and cranny of the globe is of great strategic significance and that there are threats to U.S. interests everywhere,” writes renowned international relations theorist John Mearsheimer in his most recent piece for The National Interest. “Not surprisingly, they live in a constant state of fear.”

The fiction that every corner of the Earth is a vital U.S. interest and the consequent state of perennial fear together make unnecessary conflict more likely. And that is the great danger of entangling alliances.

67 thoughts on “The Danger of Entangling Alliances”