At TomDispatch.com, Tom Engelhardt has a revealing article on the truly global nature of America’s war on terror, accompanied by a unique map put together by the Costs of War Project at Brown University’s Watson Institute for International and Public Affairs. The map reveals that America’s war on terror has spread to 76 countries, as shown below:

This metastasizing of “counterterror” efforts is truly paradoxical: the more the U.S. military works to stop terror, the more terror spreads. “Progress” is measured only by the growth of efforts to stem terror networks in more and more countries. But the notion of “progress” is absurd: That 76 countries are involved in some way in this war on terror is a sign of regress, not progress. After 16 years and a few trillion dollars, you’d think terror networks and efforts to eradicate them would be decreasing, not increasing. But the war on terror has become its own cancer, or, in social-media-speak, it’s gone viral, infecting more and more regions. 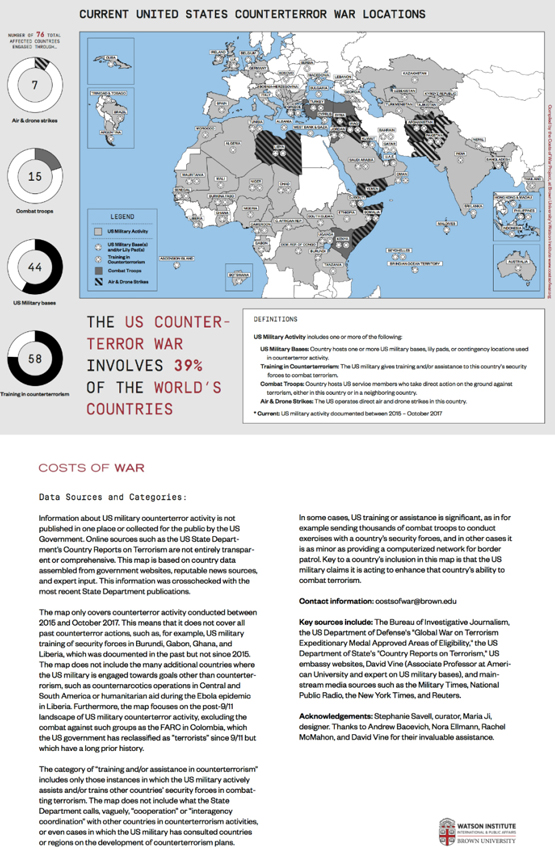 A metaphor I like to use is from Charles Darwin. Consider the face of nature – or of terrorism – as a series of tightly interlinked wedges. Now, consider the U.S. military and its kinetic strikes (as well as weapons sales and military assistance) as hammer blows. Those hammer blows disturb and contort the face of nature, fracturing it in unpredictable ways, propagating faults and creating conditions for further disturbances.

By hammering away at the complex ecologies of regions, the U.S. is feeding and complicating terrorism with its own violence. Yet new fracture lines are cited as evidence of the further growth of terrorism, thus necessitating more hammer blows (and yet more military spending). And the cycle of violence repeats as well as grows.

A sensible approach: Stop hammering away with missiles and bombs and drones. Stop feeding the terrorist wolf with more blood and violence.

But the U.S. government is caught up in a seemingly endless cycle of violence and war, as Engelhardt notes here:

Let me repeat this mantra: once, almost seventeen years ago, there was one [country, Afghanistan, the U.S. targeted]; now, the count is 76 and rising. Meanwhile, great cities have been turned into rubble; tens of millions of human beings have been displaced from their homes; refugees by the millions continue to cross borders, unsettling ever more lands; terror groups have become brand names across significant parts of the planet; and our American world continues to be militarized.

This should be thought of as an entirely new kind of perpetual global war. So take one more look at that map. Click on it and then enlarge it to consider the map in full-screen mode. It’s important to try to imagine what’s been happening visually, since we’re facing a new kind of disaster, a planetary militarization of a sort we’ve never truly seen before. No matter the “successes” in Washington’s war, ranging from that invasion of Afghanistan in 2001 to the taking of Baghdad in 2003 to the recent destruction of the Islamic State’s “caliphate” in Syria and Iraq (or most of it anyway, since at this moment American planes are still dropping bombs and firing missiles in parts of Syria), the conflicts only seem to morph and tumble on.

A new kind of perpetual global war: Engelhardt nails it. To end it, we need to stop feeding it. But as the map above indicates, it seems likely that U.S. hammer blows will continue and even accelerate, with results as violently unpredictable as they are counterproductive.

8 thoughts on “The ‘War on Terror’: The Globalization of Perpetual War”