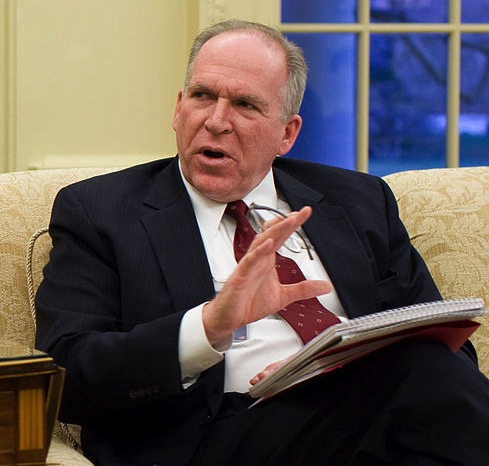 Senator Rand Paul is not the only one with serious questions about the nomination of John Brennan for CIA Director! Many people are rightly concerned that the CIA Nominee failed to provide a clear answer to Paul’s question: “Do you believe that the president has the authority to order lethal force, such as a drone strike, against a U.S. citizen on U.S. soil, and without a trial?”

This coming Wednesday, Feb. 27, the House Judiciary Committee will hold a hearing on “Drones and the War On Terror: When Can the U.S. Target Alleged American Terrorists Overseas?” Unfortunately, besides being framed in a completely leading way, the only witnesses that will testify — all four — were drawn from the same Lawfare blog. Lawfare co-founder Benjamin Wittes (who doesn’t even possess a law degree himself) gloats about it. Have you ever heard of a congressional hearing that calls all of its “experts” from one certain pro-war agenda-driven blog?! (Note how the Lawfare blog byline, “Hard National Security Choices”, masks how these blogging lawyers tend to come up with the very easy answer that the law of force is the answer instead of the rule of law. Clearly the aim of this “Judiciary Hearing” should be questioned as it does not appear it is to fairly consider the range of views about the illegality of drone assassination without judicial process.)

Additionally, we here in Minnesota have initiated meetings and letters signed now by over 200 members of different peace groups asking our Senators Amy Klobuchar and Al Franken, given their important Judiciary Committee assignments, to use their influence to seek answers. We’ve asked several other serious questions about Brennan’s background with CIA torture black sites as well as his role in drone assassinations (in this latest full letter to Sen. Klobuchar.)

Finally, our Veteran Intelligence Professionals for Sanity (VIPS) group sent a letter Senator Feinstein warning her about endorsing Brennan, who cooperated with former CIA Director George Tenet as he helped fix the Bush administration’s case for war on Iraq. It would be her next-to-worst mistake of her tenure on the Senate Intelligence Committee, we told her. The worst – we hope she now concedes – was voting to authorize the Iraq War. Read the letter in full here.

Let me also mention something else that seems to be going on in the “legal” debate that is now distracting people as it devolves into party partisanship. A number of law professors and legal commentators, from both the Right and the Left (even most recently Georgetown Law Professor David Cole who wrote: “Laying Down the Law–Why Obama’s targeted killing is better than Bush’s torture“) have turned what should be a much wider real debate based on facts and law into the narrow, more partisan-driven question of “What’s worse? (Bush’s) Torture or (Obama’s) Drone Bombing?”

Some like Cole, at least have the decency to preface their comments with “well they are both wrong, but…..” while Bellinger III and others of his Lawfare ilk post their challenges on the other side of the partisan “divide,” that in fact killing is worse than torture, using such common sense arguments that it’s better to be alive with your fingernails torn out than to be dead.

Isn’t this partisan “divide” as to whether to prefer torture or assassination as the lesser evil a bit like counting how many demons can dance on the head of a pin? It’s certainly confusing to those of us who think torture AND drone assassination are wrong, wrong, wrong. The unfortunate result, however–and perhaps the goal of the two party kabuki theater–is that the entire red herring “debate” distracts the partisans of both parties, making both Republicans and Democrats more complacent about both torture & drone assassination. This is how so many people come to ignore the right and wrong of it all and turn it into a mere political difference of opinion.

By Coleen Rowley (with editing assistance from Hugh Iglarsh, writer/editor/citizen based in Chicago)

These two words sum up well the op-ed I co-wrote with Bogdan Dzakovic before the ninth anniversary of the 2001 terrorist attacks last year, a shortened version of which was published later in the Los Angeles Times under the title: “WikiLeaks and 9-11: What If?” There are so many reasons why and examples how secrecy hurts public safety; why it should be considered at best a necessary evil; why both civil rights advocates and security experts recognize that secrecy must be limited in both time and extent.

The truth about governmental secrecy is precisely contrary to the propaganda message of the last few years, especially since the advent of WikiLeaks and the Bush and Obama administrations’ renewed vigor in prosecuting government whistleblowers as a threat to security. We are constantly fed the Orwellian myth that governmental secrecy protects us. But the opposite is true: effective governance and public safety are simply not possible unless secrecy is kept to a bare minimum.