Julian Assange, embattled director of WikiLeaks and now the focus of confusing and nebulous rape and molestation charges, lashed out over what he called a “smear campaign” by the Pentagon, which is still smarting from the release of 75,000 classified war documents, and reportedly girding for more, as promised by WikiLeaks last month. His accusations against the U.S government have led to a stream of vitriol from the peevish and cynical mainstream media, which seems to relish the opportunity to exploit the ostensively soft underbelly of the truth dragon. As the tawdry details behind the charges against Assange unfold, headlines from Newsweek and Gawker and every website that has linked to them seem to be predicting the 39-year-old’s demise. Gawker has established a WikiLeaksiLeaks site for people willing to tattle-tale on Assange. Newsweek, citing a single source, implies that the entire WikiLeaks front office is plotting his ouster:

A person in close contact with other WikiLeaks activists around Europe, who asked for anonymity when discussing a sensitive topic, says that many of them were privately concerned that Assange has continued to spread allegations of dirty tricks and hint at conspiracies against him without justification. Insiders say that some people affiliated with the website are already brainstorming whether there might be some way to persuade their front man to step aside, or failing that, even to oust him. Given that Assange is the person who put WikiLeaks on the map, and given that no one appears more entranced by the aura surrounding WikiLeaks than Assange himself, that could certainly cause the website considerable anguish about its own practice of “transparency,” “democracy,” and “integrity.”

This is hardly the circle of folks surrounding Assange as described in The New Yorker in June, but no mind. The question is, is there a smear — orÂ  is Julian Assange just a paranoid jerk who doesn’t like to use condoms? Level heads outside the ad hominem abuse spewed by say, Gawker andÂ  The Daily Beast,Â  are starting to wonder.

The estimable Jim Fallows, who could never be accused of flying off on crackpot theories or spreading rumors to fill space — in fact he has been a long-time critic of media manipulation in Washington — issued a thoughtful post on The Atlantic online yesterday, pointing to some connect-the-dots that Fabius Maximus (another reputable website founded by ex-military officers) has been doing on the Assange case:

I am generally wary of mentioning a news development that I don’t have any particular connection to, or angle on, or opportunity to offer new reporting about. The exception in this case is because the line of analysis I’ll mention, if true, would be significant. It comes from a source whose judgment I’ve learned to respect over time. But the conspiratorial interpretation he suggests is one I usually resist, and I don’t have the resources or time to go independently into the questions he has raised. So as an alert to a possibility that deserves consideration but that I can’t prove myself, here goes:

It is worth reading in order the series of posts on the Fabius Maximus site — from earliest to latest here, here, here, and here — making the case that the “official” story of the rape accusations against Julian Assange of Wikileaks is too strange and coincidence-ridden to be easily believable.

Fabius Maximus is merely doing what other bloggers are not, taking a cool-headed look at the developing (often confusing) facts of the case and wondering aloud how — and why — the mainstream media are coming to such lemming-like conclusions about it. To begin, why is it so difficult to believe that the U.S government — which lied and misinformed us right into a bloody never-ending war in Iraq– might want to delegitimize Assange? Dopey commentators like Jonah Goldberg dismiss Assange’s accusations because to him, every government “hit” should look like a James Bond movie:

Iâ€™m not necessarily advocating that we take him out. First of all, even if it were a good idea, itâ€™s too late now. But think about it. If you go by nearly every Hollywood treatment of the CIA or the NSA, Assange is precisely the sort of guy who should have been garroted in his French hotel room years ago…What I think is interesting about this is that the Wikileaks case is a perfect illustration of how not just outfits like the CIA and NSA but also the far more powerful entity most commonly known as â€œThe Manâ€ arenâ€™t nearly as powerful as many think they are.

Fair enough. Considering that Goldberg is the four-star commander of the 101st keyboarder brigade, we should expect nothing less than reactionary hooey in his response. But if life is like a movie, let’s take a look at the accusations against Assange. “Woman B” was a complete unknown to the WikiLeaks set before the incident in question. She admittedly pursued Assange with a cold calculation (and pink cashmere), and had him, literally, feeding her niblets in a daze, before the day was out. It’s so Hollywood — but it obviously worked. Check out her blurred-out face in the front row on the day in question, below.

One of the men present recalled her as a person of a seemingly nervous disposition who didnâ€™t fit in.

The woman admitted trying to engage her hero in conversation.

Assange seemed pleased to have such an ardent admirer fawning over him and, she said, would look at her â€˜now and thenâ€™. Eventually he took a closer interest.

She explained in her statement that he was tucking into cheese served on Swedish crispbread when she asked if he thought it was good.

Assange looked at her directly and started to feed her. 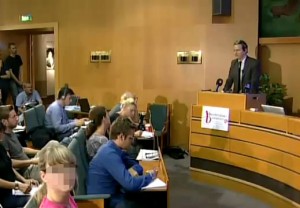 Funny, even Reason’s Michael Moynihan, who has had it in for Assange from the start, concedes that “that such dirty tricks have a long pedigree in American intelligence circles,” but he can’t, however, bring himself to imagine the government might be targeting Assange with one right now. He concentrates solely on “Woman A,” pointing out that she is a known quantity, a radical Swedish feminist with a long history of left-wing positions on sexual power and gender politicsÂ  — implying that whatever went wrong (refusal to wear a condom? Broken condom? Refusing to take an STD test?) in the reportedly brief, consensual affair, ignited all the reflexive impulses of a longtime “equality watchdog,”Â  “operating off of a very broad (Swedish legal) definition of rape and ‘sexual molestation.'” In other words, a woman scorned. Moynihan says nothing of “strange” “Woman B,” and instead concludes “even a cursory look at the case would suggest that while it appears that Assangeâ€™s name is being dragged through the mud, it isnâ€™t by the CIA.”

But what about Woman B? An ex-CIA source of mine says the agency employed the paid use of “honeypots,” to trap targets all the time. While on the face it looks like Assange tangled with the wrong woman (Woman A) and some seriously elastic Swedish sex laws, there is no reason to automatically discount the strange coincidences raised by Fabius Maximus and others. If we are going to look at Woman A’s motives, why not focus on Woman B’s strange story as something more complex than just a geek groupie with a crush?

What is called for here is a more discerning approach and an open mind. A stubborn lack of imagination, and an ill-begotten instinctÂ  to support the power grid is much less helpful (look what happened when we let the mainstream rubes take over in 2003!) A big nod to Fallows and others for urging the brakes on Assange’s premature demise.

16 thoughts on “Fallows, others, taking another look at Assange’s ‘demise’”