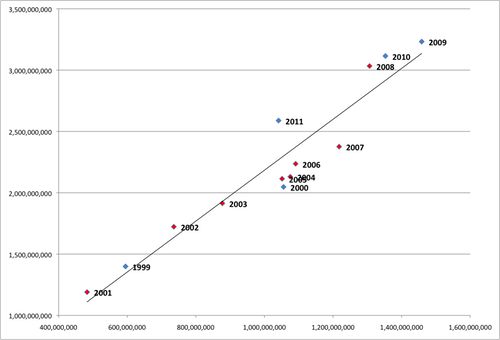 The graph, from the Just the Facts blog, shows the trend in economic and military aid to Latin America between 1999 and 2010. It’s a common mistake, what with Reagan’s extreme terrorism in Nicaragua and El Salvador, to think that the height of U.S. intervention into Central and South America has gone and passed. But U.S. policy is as imposing as ever.

Al Jazeera has a special series up on the drug wars, gang violence, and state militias throughout the Americas. From it, Guatemala is an interesting case. In 1999 President Clinton visited Guatemala and publicly apologized on behalf of the U.S. for orchestrating the 1954 overthrow of their democratically elected President and the four decades of horror and violence perpetrated by the U.S. trained and funded state militia that claimed over 200,000 Guatemalan lives. He said, ““For the United States, it is important that I state clearly that support for military forces and intelligence units which engaged in violence and widespread repression was wrong, and the United States must not repeat that mistake.”

But now, “The Kaibiles [the U.S. trained and funded Guatemalan militias] are infamous for their role in killing civilians during Guatemala’s civil war” and have been recruited en masse by the drug cartels in the area, notably “Mexico’s Zetas drug gang, especially in the Peten and Alto Verapaz regions bordering Mexico.” They are being paid to train the cartels “in the art of military warfare and the use of explosives.” In other words, to teach the cartels what the Americans taught them. And so now, U.S. foreign policy is again directly contributing to even more criminal atrocities against the people of Guatemala (and elsewhere). In May, Guatemalan military forces began to enforce a state of siege in the Guatemalan province of Peten, after Mexican drug traffickers massacred 27 farm workers. Add to that the seemingly counterproductive nature of the U.S. policy to clamp down on drug gangs: the policy directly contributes to the ongoing drug gang problem.

Similar stories abound in much of the region. The graph above, along with the unintentional indirect funding and training of violent drug cartels, makes one speculate that the imperial intentions south of the border are much more like imperial grand strategy in the Middle East: maintaining obedient thug governments who put the U.S. national security community first, and their people last.

A few days ago, Mexican authorities captured Osvaldo Garcia Montoya, alias El Compayito, one of the most brutal of the new drug lords and the leader of the Hand with Eyes Cartel that operates in Mexico State and parts of Mexico City.

He is said to have admitted responsibility for killing more than 600 people, most of them rivals who were beheaded and further dismembered.

In fact, he was supposedly planning to kill five members of his own gang who were going to desert, and then post the gruesome murders on the internet, when he was captured.

What really drew my attention, though, was Garcia Montoya’s background: he was a former Mexican military officer who had been trained in Guatemala at the Kaibil Academy.

10 thoughts on “Interventionism South of the Border: Teaching Drug Cartels How to Kill”