Thought I would draw quick attention to these poll results from Maryland professor and Brookings Institution scholar Shibley Telhami. “Only 19 percent of Israelis polled expressed support for an attack without U.S. backing,” writes Telhami, “according to a poll I conducted — fielded by Israel’s Dahaf Institute Feb. 22-26 — while 42 percent endorsed a strike only if there is at least U.S. support, and 32 percent opposed an attack regardless.” 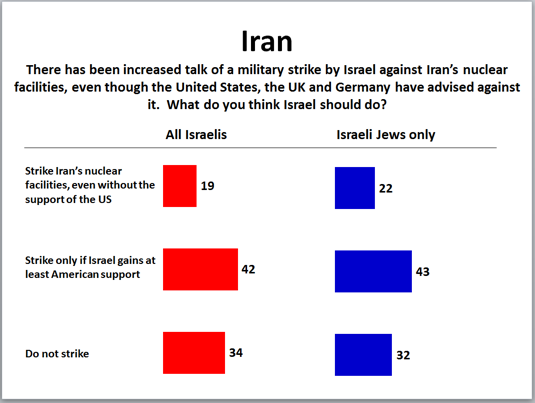 A majority of Israelis polled, roughly 51 percent, said the war would last months (29 percent) or years (22 percent), while only 18 percent said it would last days. About as many Israelis, 44 percent, think that an Israeli strike would actually strengthen Iran’s government as think it would weaken it (45 percent).

Paul Pillar comments, saying that Obama should – but won’t – talk about these types of things to the Israelis, AIPAC next week, and in public generally.

Of course, if the president were to speak in such terms he would be met with a chorus of denunciation by American critics who already have been arguing that the military option should be talked up, not down, and that saber rattling is the best way to get Iranian attention and Iranian concessions. But political and psychological imperatives mean that the response of Supreme Leader Khamenei or other Iranian leaders to saber rattling is more likely to be to dig in their heels and be more conscious than ever of the need not to show weakness.

The U.S. has been pretty clear in opposing a military strike on Iran at least for now. And Gen. Martin Dempsey has said that if Israel strikes Iran, they won’t get U.S. help. But I view that more as political grandstanding. If Israel attacked Iran, and Iran reciprocated in any way (something they’ve pretty much promised), I simply don’t see the U.S. staying out of it. Any Iranian retaliation will prompt a military response from the U.S. The question really seems to be, will Israel call Dempsey’s bluff?

As I’ve lamented before: The fact that a reckless, unjustified Israeli war of aggression in the Middle East should warrant costly U.S. involvement as Israel’s protectorate shows the perversity of U.S. foreign policy.