DC Editor John Glaser spoke to hundreds of people at Duke University last month on how America is sowing the seeds of blowback all over again. 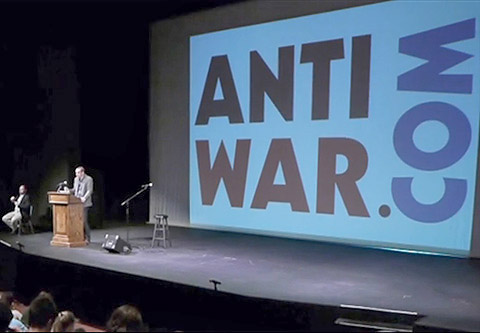 Jordan: US Troops Helping Prepare for Syrian Attack: At least 150 US troops are deployed in a base on the outskirts of Amman, spending time on the dual goals of reinforcing the Jordanian side of the border with Syria, and preparing for the possibility of a chemical weapons attack.

US Drone Strike Kills 18 in Pakistan’s Orakzai Agency: At least 18 people were killed and another six wounded Thursday in a US drone strike against the Orakzai Agency, with the drones firing several missiles at a compound belonging to Maulana Shakirullah, a commander loyal to the Bahadur Group.

Afghan Government ‘Could Collapse’ After 2014, Report Finds: The Afghan government could crumble and fall after NATO’s expected withdrawal in 2014 and the Karzai government is predicted to run another fraudulent election that year, according to a report by the International Crisis Group (ICG).

US Embassy Security Chief Slain in Yemeni Capital: Attackers assassinated the head of security for the United States Embassy in Yemen Thursday, targeting the man, Qassem Aqlani, in an attack near his home in the capital city of Sanaa.

If you are interested in buying advertising space at Antiwar.com, please contact Angela Keaton at +1-323-512-7095. Rates available on July 1st.

Forward this newsletter to your friends and encourage them to subscribe. (We don’t spam!) Fill out an application for the Antiwar.com Capital One credit card. Have a clunker in the driveway? Give it to us and then write it off! Want to donate your car, trailer, boat, or other junk to Antiwar.com? Please call 1-800-240-0160 for free next-day pickup. Or just make a good old-fashioned donation. Questions? Call 323-512-7095 or email akeaton@antiwar.com.