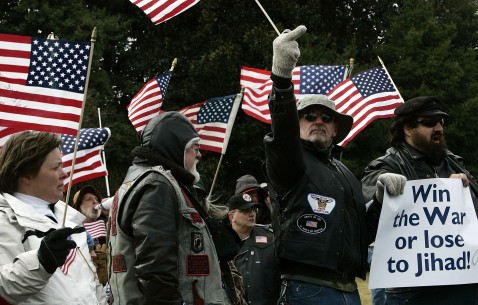 Over at the indispensable LobeLog, James A. Russell writes on this reflective tenth anniversary of the Iraq War that it isn’t just the fault of the Bush administration and the obedient Congress. Americans are to blame too.

While it is true that we got led down the path to war by officials that consciously lied about intelligence to justify it, concealed their real motivations and willfully ignored voices that questioned predictions of a quick and easy victory — the undeniable truth is that this country allowed itself to be led like lambs to the slaughter.

And it was a slaughter. The river of human blood — Iraqi and American, to say nothing of lasting injuries on the battlefield that have wrecked lives around the world — flows wide and deep as documented by the Army’s Office of the Surgeon General.

So who is really responsible for the catastrophe and what should we do about it? Thus far, this country has avoided looking too hard into the mirror and instead blames the small caste of ideologically motivated neoconservative advisers clustered in the Pentagon and White House who had their own reasons for wanting to get rid of Saddam Hussein and could have cared less about the potential costs.

There has been no truth commission, no calling to account for these officials, who all returned to their law offices, lobbying jobs, became scions at the Council on Foreign Relations or were rewarded the chance to pollute the minds of students at Harvard and elsewhere.

These advisers took a free pass while our soldiers, sailors, airmen and Marines picked their way through the wreckage of their comrades’ body parts and dead Iraqis that littered the landscapes of Ramadi, Fallujah, Mosul and a host of other places that most Americans had never heard of.

However, it wasn’t just the Bush administration that took a free pass. An uncomfortable truth is that Americans, like those advisers, have also chosen to avoid taking a long, hard look in the mirror.

As much as this country wants to avoid it, the fact is that the war and the way it was launched says more about this country than those who sold the war with their public relations blitz.

He’s right. As self-serving and deceptive as political leaders in Washington are, they are ultimately beholden to popular opinion. But Americans are easily swayed, easily frightened, and have an alarming nationalist streak.

On the eve of the Iraq war, one of the 23 Senators who voted against the authorization for the use of force against Iraq, Robert Byrd, quoted Nazi war criminal Hermann Georing, who at the Nuremberg tribunals had the following exchange:

Göring: Naturally, the common people don’t want war; neither in Russia nor in England nor in America, nor for that matter in Germany. That is understood. But, after all, it is the leaders of the country who determine the policy and it is always a simple matter to drag the people along, whether it is a democracy or a fascist dictatorship or a Parliament or a Communist dictatorship.

Gilbert: There is one difference. In a democracy, the people have some say in the matter through their elected representatives, and in the United States only Congress can declare wars.

Göring: Oh, that is all well and good, but, voice or no voice, the people can always be brought to the bidding of the leaders. That is easy. All you have to do is tell them they are being attacked and denounce the pacifists for lack of patriotism and exposing the country to danger. It works the same way in any country.

18 thoughts on “On Iraq, Americans Are To Blame Too”