A peace deal will not be concluded among the United States, North Korea, and South Korea in the next three to five years predicts Lawrence Wilkerson, a College of William & Mary professor and the former chief of staff for Secretary of State Colin Powell, in a recent interview with host Aaron Maté at The Real News.

Wilkerson points to “irreconcilable elements” as supporting his conclusion. These irreconcilable elements, says Wilkerson, are “China’s interest in not having a unified Korea with US presence still there, the North’s interest in not surrendering all of its nuclear weapons capability, the South’s interest ultimately in – if it is a unified peninsula – having those nuclear weapons itself, and, ultimately, both Koreas – were they to be united – wanting themselves to kick the United States presence off the peninsula.”

END_OF_DOCUMENT_TOKEN_TO_BE_REPLACED

Interviewed Tuesday by host Sharmini Peries at The Real News, Lawrence Wilkerson, a College of William & Mary professor and former chief of staff for United States Secretary of State Colin Powell, warned that “the neoconservative agenda” for an escalated United States war on Syria followed by war on Iran has had a “resurrection” in President Donald Trump’s administration.

Regarding talk about the US taking military action in Syria in response to potential allegations of the use of chemical weapons – false flag or otherwise – in the country, Wilkerson comments that the war advocates are “looking for every excuse, any excuse, all excuses, to reopen US operations, major U.S. operations, against [President Bashar al-Assad] in Syria, always realizing that the ultimate target is Tehran.” Tehran is the capital of Iran.

END_OF_DOCUMENT_TOKEN_TO_BE_REPLACED

President Donald Trump says he wants to improve relations between the United States and Russia, and he met in July with Russia President Vladimir Putin largely in a purported effort to move toward this goal. Yet, the Trump administration continues to send more US troops and military equipment to along the Russia border, including in Norway. Around 300 US Marines were deployed to Norway in the final days of the Barack Obama administration. Then, last week, Reuters reported that the Trump administration will soon more than double to 700 the number of Marines in Norway and that some Marines will be stationed closer than before to Norway’s border with Russia.

The plans, the Reuters article notes, “triggered a sharp reaction from Moscow, which called the plans ‘clearly unfriendly’.” No doubt. As peace advocate and three-time presidential candidate Ron Paul has often commented, Americans would be quite perturbed if Russia, China, or some other nation started massing military forces across the border in Mexico or in the Gulf of Mexico. Why should Russians not be perturbed by the massing of US forces nearby in Europe – along with the successive introduction of European nations near Russia into the North Atlantic Treaty Organization (NATO)?

END_OF_DOCUMENT_TOKEN_TO_BE_REPLACED

On Monday, Rep. Ro Khanna (D-CA), joined by 14 fellow Democratic United States House of Representatives members, sent a letter to President Donald Trump supporting Trump pursuing diplomacy and “incremental progress” with North Korea. The letter also expresses concern about efforts toward peace being hindered by people – both Republican and Democrat, and both inside and outside the Trump administration – seeking “to scuttle progress by attempting to limit the parameters of the talks, including by insisting on full and immediate denuclearization or other unrealistic commitments by North Korea at an early date.”

END_OF_DOCUMENT_TOKEN_TO_BE_REPLACED

In his written testimony, Turley argues the proposed AUMF is the next step in Congress’ abdication of its constitutional responsibility over war after “decades of concerted effort by Congress to evade the responsibility for the most important decisions committed to it by the Framers” of the US Constitution, resulting in the US being “engaged in indefinite, undeclared war – the very menace that the Framers sought to prevent with express constitutional language requiring congressional declarations of war.”

END_OF_DOCUMENT_TOKEN_TO_BE_REPLACED 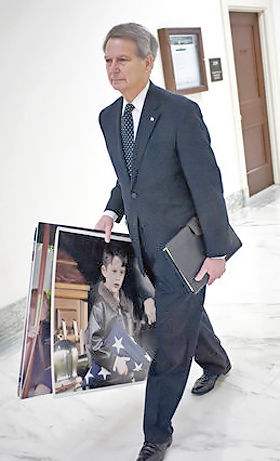 On Tuesday, Rep. Walter Jones (R-NC), who is seeking reelection for what he has indicated will be his final term in the United States House of Representatives, won his Republican Party primary. Jones defeated two other candidates — a Washington, DC lobbyist who holds elective office in the district and one of Jones’ primary opponents from 2016.

Will Rahn wrote a Thursday editorial at CBS News concerning Jones’ primary victory and Jones’ history in the House. In the editorial titled “In praise of Walter Jones,” Rahn refers to Jones as a “man of conviction in Washington” who has been punished by his party’s leadership because of his independent actions, including, Rhan writes, becoming “one of the GOP’s most fervent voices for peace.”

Jones is a member of the Ron Paul Institute for Peace and Prosperity Advisory Board.