Antiwar.com columnist David R. Henderson appeared this weekend on BBC World Service “Weekend” radio show. He spoke about why a trade war is a bad idea for consumers and workers on both sides of any trade war.

David R. Henderson is a research fellow with the Hoover Institution and an emeritus professor of economics in the Graduate School of Business and Public Policy at the Naval Postgraduate School. 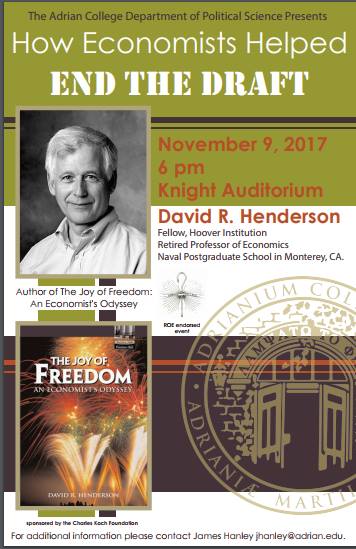 I will be giving my speech “How Economists Helped End the Draft” at Adrian College in Adrian, Michigan this Thursday at 6:00 p.m.

Earlier in the day I’m giving a guest lecture in a class on globalization, but I’m pretty sure that attendance is restricted to students in the class.

If you attend, please come up and say hi afterwards.

David R. Hendersonis a research fellow with the Hoover Institution and a professor of economics in the Graduate School of Business and Public Policy at the Naval Postgraduate School. He is author of The Joy of Freedom: An Economist’s Odyssey and co-author, with Charles L. Hooper, of Making Great Decisions in Business and Life (Chicago Park Press). His latest book is The Concise Encyclopedia of Economics (Liberty Fund, 2008).

He has appeared on The O’Reilly Factor, the Jim Lehrer Newshour, CNN, and C-SPAN. He has had over 100 articles published in Fortune, the Wall Street Journal, Red Herring, Barron’s, National Review, Reason, the Los Angeles Times, USA Today, and the Christian Science Monitor. He has also testified before the House Ways and Means Committee, the Senate Armed Services Committee, and the Senate Committee on Labor and Human Resources. Visit his Web site.

We often think of Belarus as being an authoritarian dictatorship. And it is. But there is some good news. Jon Basil Utley, associate publisher of The American Conservative, recently returned from Belarus and reports on some positive signs. While the government still owns and runs a large segment of the economy, Belarus ranks twelfth in the world for the ease of starting a business. Austria, by contrast, ranks a dismal 106th. And while President Alyaksandr Lukashenka has a bad habit of jailing political opponents, they tend to be released quickly.

END_OF_DOCUMENT_TOKEN_TO_BE_REPLACED

In fact, it would be unfair to suggest that he got all his ideas about the world from his brother and father. It would be equally off-base to suggest that he has any of his own. What he, like most of the other Republicans who may run for president, has are muscular-sounding bromides that substitute for understanding.

This is from Steve Chapman, “Jeb Bush’s Empty Indictment,” February 23, 2015. The piece is excellent.

Responding to Jeb Bush’s claim that “We definitely no longer inspire fear in our enemies,” Chapman writes:

We no longer scare our enemies? The United States is a superpower that has been at war for 13 years, has brought about regime change in multiple countries, and is currently leading an air campaign against the Islamic State while conducting drone wars in Pakistan, Yemen and Somalia. If those facts give our enemies no anxiety, our enemies are exceedingly dim.

The Naval War College, based in Newport, Rhode Island, runs a special 11-month course for foreign Navy officers. On February 3, the Naval War College held a special morning session at the Hoover Institution, where I am a research fellow. I was invited to speak. The best invites, in my experience, are those for which I get to choose the topic. That happened in this case. So the topic I chose was “An Economist’s Case for a Non-Interventionist Foreign Policy.”

The audience was, I believe, all Navy officers. There were 47 of them, representing 44 countries. I was warmly received by many of them, especially the officer from Bangladesh, and courteously received by the few U.S. military officers in attendance.

At a speech that Defense Secretary Leon Panetta gave at the Naval Postgraduate School in Monterey yesterday, I posed the following question:

an al Qaeda computer seized in Afghanistan in 2001 indicated that the group’s budget for research on weapons of mass destruction (almost all of it focused on primitive chemical weapons work) was some $2,000 to $4,000.

In your previous job [I made a mistake here: he was already Defense Secretary when he said it but it seemed clear that these data were ones he got as CIA Director], you yourself pointed out that there are fewer than two dozen key operatives left in al Qaeda. Given our huge budget deficit, when do you say, “Enough is enough. Let’s end those wars because the costs are so much higher than the hypothetical gains.”

Here’s his answer from Larry Parsons’ report in the Monterey County Herald, which agrees with the one I remember hearing:

Responding to an NPS faculty member’s question about winding down the costly wars in Afghanistan and Iraq, Panetta responded sternly.

“Those wars will end when the individuals who have threatened this country are no longer there to threaten our country,” he said.

The goal is to leave Iraq and Afghanistan stable, secure and “in a position to build on the sacrifices that have been made,” he said.

We could do some parsing here, taking him literally, and say that Panetta is saying the wars will end when those who threatened the United States in the past are no longer there. That’s a plausible, though expensive, goal. But does anyone believe that if people in that part of the world threaten the United States in the future, he and his boss will say, “No problem: we got rid of all the past threats.” It seems clear from context that Panetta means that as long as there are threats there, the wars will continue. Which means that he is arguing for carrying on the wars forever. Although 2024 is not forever, last week, the Telegraph in the United Kingdom reported that the Afghan and U.S. governments are close to signing a deal to keep U.S. troops in Afghanistan through the end of 2024.

By the way, it was gratifying to have a number of my past students from my Cost/Benefit Analysis class stop me in the hallway or e-mail me afterward to comment that they got my point immediately because of the class I had taught them.

Cross-posted at the Library of Economics and Liberty blog.