The disturbing footage of the US military in action will be excused by many conservative warmongers in one of two ways (or perhaps both). One, although the incident is unfortunate, collateral damage is inevitable, and this incident should not discredit the greater good that is the war on terror in Iraq. And two, the people killed must have been terrorists, harbored terrorists, or supported terrorists. And if none of these three, then they must know terrorists, have done business with terrorists, or might possibly know or do business with terrorists in the future. Heck, if they live in Iraq they are Muslims and therefore potential terrorists so we might as well fight them over there so we don’t have to fight them over here.

Update: Something just as disturbing is the comment section about this on military.com.

You’re a liar and murderer, sayÂ protesters in Britain. 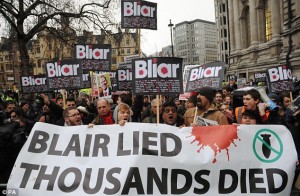 More details hereÂ also. Although I often criticizeÂ soldiers for participating in the war in Iraq, I believe Blair and Bush are the chief war criminals.

Back on February 13, 2009, I wrote a “Letter to a Christian Young Man Regarding Joining the Military.” At the end of the letter I included this appeal:

If any readers are veterans, consider themselves to be Christians, agree with the sentiments expressed in this letter, and would be willing to let me append their name, branch, and rank to any future use of this letter, please contact me at lmvance@juno.com. The fact that you â€œservedâ€ and I didnâ€™t might be what is needed to help persuade some young man (or woman) to not join the military.

I have now posted this letter on my websiteÂ with the names of about 40 Christian veterans who contacted me.Â If you are a Christian veteran and wish to have your name added, please contact me with your name, branch, and rank and I will add your information right away.

Some thoughts on the Gitmo 9/11 suspects that are supposedly behind 9/11 and are due to come to New York for a civilian trial:

Am I excusing anything these men may have had to do with 9/11? Certainly not. But neither do I make excuses for the U.S. foreign policy that created terrorists.

Military enthusiasts in Pennsylvania have begunÂ re-enacting, not the Civil War, but the Vietnam War. The stated purpose is to honor and pay tribute to Vietnam veterans. “It was time for us to be proud of what were called on to do, even though it turned out to be a very unpopular thing,” said oneÂ Army veteran.

I know two Vietnam veterans that would disagree. James Glaser and Michael Gaddy are not proud of their service killing in Vietnam.

Since the death of Walter Cronkite, I have heard some conservatives moaning about some things he said during the Vietnam War.Â  After a lecture I gave earlier this summer, a critic in the audience tried to defend the Vietnam War. But the war in Vietnam wasn’t just a mistake or mishandled, it was an unjust war that senselessly slaughteredÂ millions ofÂ Vietnamese,Â Laotians, and Cambodians for the crime of being “commies,” “gooks,” or just being in the way. 58,000 American soldiers died whileÂ helping to perpetrateÂ this slaughter. Why shouldÂ we payÂ them tribute? The war in VietnamÂ is undefendable. It is still an unjust war.