Chalmers Johnson, author of the indispensable Blowback trilogy, discusses the 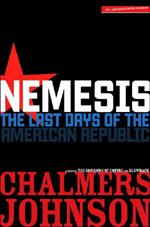 economic costs of empire, his belief that Bush has decided against war with Iran, the failure of the American people and the structure of the Republic to prevent executive branch tyranny, Admiral Fallon’s dangerous insubordination for a good cause and the future of blowback against the United States, the secrecy of the national security state and Israel’s recent bombing of Syria.

Chalmers Johnson is president of the Japan Policy Research Institute, a non-profit research and public affairs organization devoted to public education concerning Japan and international relations in the Pacific. He taught for thirty years, 1962-1992, at the Berkeley and San Diego campuses of the University of California and held endowed chairs in Asian politics at both of them. At Berkeley he served as chairman of the Center for Chinese Studies and as chairman of the Department of Political Science. His B.A., M.A., and Ph.D. degrees in economics and political science are all from the University of California, Berkeley. He first visited Japan in 1953 as a U.S. Navy officer and has lived and worked there with his wife, the anthropologist Sheila K. Johnson, every year between 1961 and 1998.

Johnson has been honored with fellowships from the Ford Foundation, the Social Science Research Council, and the Guggenheim Foundation; and in 1976 he was elected a fellow of the American Academy of Arts and Sciences. He has written numerous articles and reviews and some sixteen books, including Peasant Nationalism and Communist Power on the Chinese revolution, An Instance of Treason on Japanâ€™s most famous spy, Revolutionary Change on the theory of violent protest movements, and MITI and the Japanese Miracle on Japanese economic development. This last-named book laid the foundation for the â€œrevisionistâ€ school of writers on Japan, and because of it the Japanese press dubbed him the â€œGodfather of revisionism.â€

He was chairman of the academic advisory committee for the PBS television series â€œThe Pacific Century,â€ and he played a prominent role in the PBS â€œFrontlineâ€ documentary â€œLosing the War with Japan.â€ Both won Emmy awards. His most recent books are Blowback: The Costs and Consequences of American Empire (New York: Metropolitan Books, 2000) and The Sorrows of Empire: Militarism, Secrecy, and the End of the Republic, which was published by Metropolitan in January 2004. Blowback won the 2001 American Book Award of the Before Columbus Foundation.