Another big victory for Michelle Malkin over the forces of terrorism!

Terror sleuth and columnist Michelle Malkin discovered the hidden message in the ad â€“ a message meant to offer support for the “murderous Palestinian jihad.” 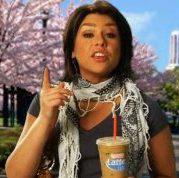 In the ad, Ray wears a scarf around her neck and holds an iced coffee. Malkin, complained that the scarf looked similar to the black-and-white checkered kaffiyeh, the traditional Palestinian scarf. Malkin explained:

The kaffiyeh “has come to symbolise murderous Palestinian jihad. Popularized by Yasser Arafat and a regular adornment of Muslim terrorists appearing in beheading and hostage-taking videos, the apparel has been mainstreamed by both ignorant (and not-so-ignorant) fashion designers, celebrities, and left-wing icons.”

Dunkin’ Donuts told AP the scarf had a paisley design, and was selected by a stylist for the advertising shoot. “Absolutely no symbolism was intended,” the company said.

But the Dunkin’ Donuts ad was pulled because “the possibility of misperception detracted from its original intention to promote our iced coffee,” the Associated Press reported.

Malkin savored her victory with a cup of 7-11 coffee, since she had earlier given the axe to Starbuck’s.

In her victory statement, Malkin declared: “It’s refreshing to see an American company show sensitivity to the concerns of Americans opposed to Islamic jihad and its apologists.”