A war-weary nation breathes a sign of relief today as the last of America’s troops finally return home from Iraq, fulfilling President Obama’s campaign pledge to have them out within 16 months of taking office.

In all seriousness, everyone who has been following the story even a little knows that just two days after his inauguration, President Obama was already talking about the promise as “aspirational” and a month later the “16 month plan” was formally replaced with the so-called 19 month plan, which would involve having some American troops leave Iraq by August 2010, declaring combat over, and keeping 50,000 troops “indefinitely.”

At the time that pledge seemed a terrible betrayal of a campaign promise that was made the center of his foreign policy in debates. Now, even the “19 month plan” is looking pretty good by comparison, as officials admit it too is being “reconsidered.”

16 months after taking office the largest drawdown Iraq has seen was the one in early 2009, and that was set up by the outgoing Bush Administration. Since then troop levels have trickled only marginally downward, with 94,000 troops still remaining.

When the 19 month plan is formally abandoned (some officials still haven’t gotten the memo that it is virtually impossible), expect it to be replaced with the 38 month plan… where the Status of Forces Agreement (SOFA) actually mandates US troops to leave the nation by the end of 2011.

Of course it is far too soon to say that the 38 month plan won’t happen, but the administration’s track record of keeping its promises is not very good, and 20 months from now officials may well be looking for another excuse to “reconsider.” 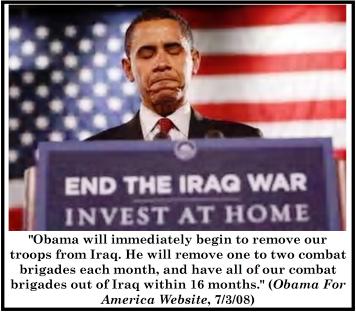