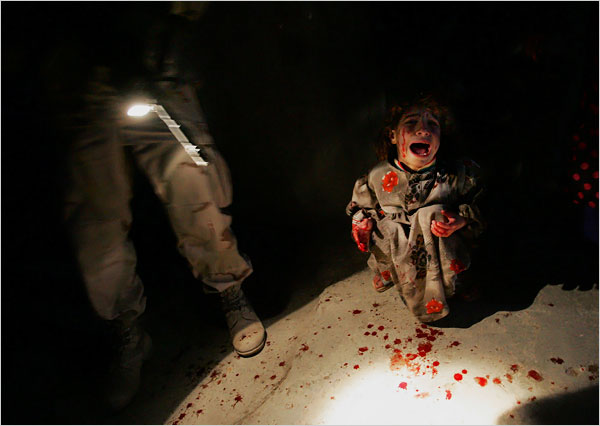 Chris Hondros, the award-winning photojournalist from Getty Images who was killed yesterday from brain injuries he sustained in a mortar attack in Libya, left his Iraq embed with a unit in the 25th Infantry Division in 2005 after publishing this photo. The image, of a little blood-spattered girl whose parents were killed by U.S forces at a security checkpoint, was taken while Hondros was traveling with the unit in Tel Afar. According to a New York Times retrospective of  war photography, he was booted from the embed shortly afterwards, but in an interview with Editor & Publisher, he said he left on his own accord, after Getty had tangled with the military over the pictures.

“Even if I had not sent those photos, I would have left that embed,” he says. “The incident had been a high stress one, and it didn’t start me out on a good footing with these particular soldiers. It’s impossible to be operating under hostility in an embedded situation.”

I was roundly mocked a couple weeks ago for my personal take on the power of images in war and the military’s post-Vietnam determination to suppress it. The detachment of today’s society from the war and the easy, breezy way we’ve waved goodbye (prematurely) to Iraq in our collective rear-view, has as much to do with the sterile way we have perceived the war (thanks to censorship and message management) as it has with willful ignorance or the fact that less than 1 percent of the population has been doing the fighting and now believes they “own” the war and our conception of it. More images like these might have at least jolted the rest of us out of our Soma holidays long enough to question the policies that led to this girl and her five brothers and sisters being orphaned in a brutal instant, which we now know, thanks to “rogues” like WikiLeaks, happened more than the U.S military was ever willing to admit.

23 thoughts on “Dead photog left embed over this image”