In one sense, it isn’t a surprise that politics attracts the biggest dip-shits around. In another sense, though, it is extremely troubling that American politics – perhaps now more than ever – has become a celebration of stupidity and ignorance (Sarah Palin being an example, but not the lone superstar in this trend).

Republican Presidential candidate Herman Cain has rapidly shot to top-tier status in the past few weeks, and has now exhibited another illustration of that disturbing trend in American politics. In a recent interview, he not only mocked Uzbekistan and its leadership as unimportant, but reveled in his own glorified ignorance.

In the interview, Brody asked Cain, who has rocketed to top-tier status in recent polls: “Are you ready for the gotcha questions that are coming from the media and others? Like, who’s the president of Uzbekistan? It’s coming, all of this stuff. And how are you dealing with that?”

Cain replied, “I’m ready for the ‘gotcha’ questions and they’re already starting to come. And when they ask me, ‘Who is the president of Ubeki-beki-beki-beki-stan-stan?’ I’m going to say you know, ‘I don’t know. Do you know?’ And then I’m going to say, ‘How’s that going to create one job?’ I want to focus on the top priorities of this country. That’s what leaders do.

“They make sure that the nation is focused on the critical issues with critical solutions,” Cain said. “Knowing who is the head of some of these small insignificant states around the world, I don’t think that is something that is critical to focusing on national security and getting this economy going. When I get ready to go visit that country, I’ll know who it is, but until then, I want to focus on the big issues that we need to solve.”

Actually, Uzbekistan is not so unimportant. The name of the President is Islam Karimov and he is one of the most brutal authoritarians in the region. The Bush administration supported his regime handsomely in order to have military bases there and help supply American troops in Afghanistan (which is directly to the south of Uzbekistan, in case Cain has as much trouble with geography as he does with pronunciation). The Karimov regime engaged in wretched abuses against individuals caught up in the Bush administration’s War on Terror, and became known for widespread torture, including boiling people alive and raping people with broken bottles. Former British Ambassador to Uzbekistan, Craig Murray, wrote an important book that Cain ought to read.

The US-Uzbekistan relationship began to sour in part because of how widespread the international condemnation was for forming such a close and supportive alliance with such a monster. But lately, the Obama administration has been cozying back up to the dictator in their execution of the Afghan war, which is yet another sign that the Afghan war is very far from over.  This map from the Washington Post illustrates how badly the US imperialists need obedient tyrants like the one in Uzbekistan, and how important Uzbekistan’s geography is for contemporary American politics. 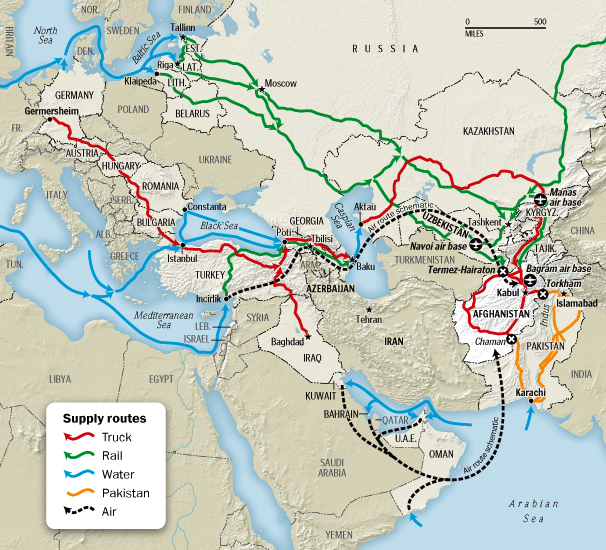 Hermain Cain knows none of this. He doesn’t know how to say ‘Uzbekistan’ and he doesn’t know who its leaders are, and he has the effrontery to run for President. And to boot, he celebrates this kind of ignorance.

Maybe if the basic facts about American foreign policy were not laughed out of the debate for fear of learning something we wouldn’t end up with candidates like Cain and policies like those of Bush’s and Obama’s.

63 thoughts on “Herman Cain Is An Idiot”