Yesterday I wrote about the lies coming out of Washington on defense spending, misrepresenting the minuscule cuts being proposed as slashing the budget and compromising “national security.” The truth is that what is being proposed are minor reductions in the rate of growth in projected defense spending and would really only bring the Pentagon’s base budget down to 2007 levels (if the cuts were even imposed in a substantive way).

The United States spent $728 billion on its military in 2010, about 45% of the world’s $1.6 trillion total (blue portion). U.S. spending amounts to more than the next fourteen largest military spending countries combined (bar chart). In fact, the U.S. spends nearly 6 times more than the next largest military spender, China. In addition, most of the top-spending countries are American allies. 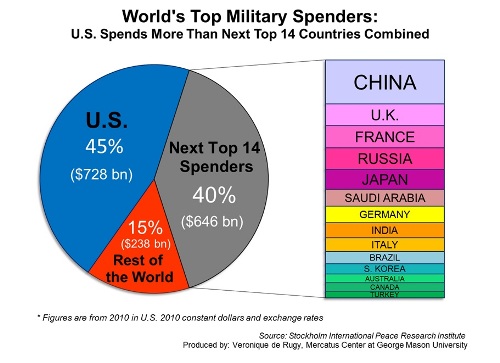 8 thoughts on “The Scope of U.S. Defense Spending”