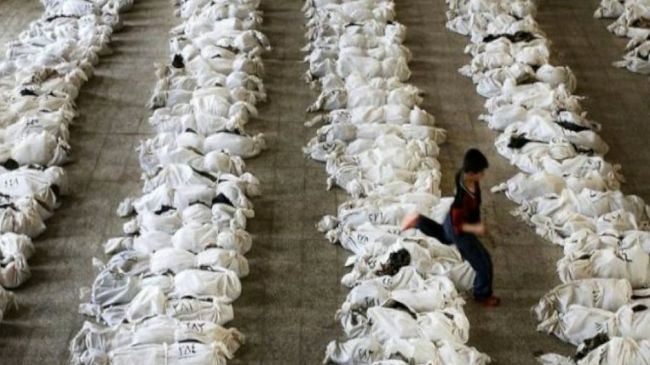 A few days have passed since the BBC irresponsibly passed off this 2003 picture of dead Iraqis as depicting dead Syrians in last week’s Houla massacre. The original photographer, who works for Getty Images, said “Someone is using someone else’s picture for propaganda on purpose.” The Telegraph:

Photographer Marco di Lauro said he nearly “fell off his chair” when he saw the image being used, and said he was “astonished” at the failure of the corporation to check their sources.

The picture, which was actually taken on March 27, 2003, shows a young Iraqi child jumping over dozens of white body bags containing skeletons found in a desert south of Baghdad.

It was posted on the BBC news website today under the heading “Syria massacre in Houla condemned as outrage grows”.

The caption states the photograph was provided by an activist and cannot be independently verified, but says it is “believed to show the bodies of children in Houla awaiting burial”.

Max Fisher at the Atlantic thinks “the BBC’s error seems like an innocent one.” He thinks it was a hasty mistake arising after the photo made its rounds anonymously throughout the Internet: “We might never know who first entered this photo into the social media currents, which sent it flying through Arabic- and English-language social networks (including my own Twitter account) until it landed on the BBC website’s front page.”

We can’t know for sure, but I don’t think it’s fair to assume the BBC’s innocent naiveté as opposed to its knowing deception. I’m not suggesting a conspiracy theory, but I think there are two pressures on news organizations when it comes to hard-to-cover situations like the one in Syria. First, there is a pressure to get the most sensational story out before anyone else does. And what’s more sensational than a pile of dead bodies? There is also pressure to pose a call to action, which in other words is a pressure to validate what has been the dominant narrative of the Syria conflict. I think it’s entirely possible that the editors at the BBC did not do their due diligence and some even knowingly let the false photo go up, hoping they wouldn’t get caught.

In any case, this is a reminder that much of the journalism on Syria has to be taken with a grain of salt. We know much of the establishment’s information has been attained through opposition activists or expat groups and we also know of a number of instances where they have fibbed the reality on the ground. We also know the opposition has committed serious atrocities, and so have an interest in glossing over those facts in favor of information emphasizing the atrocities of the Assad regime. This doesn’t mean the Assad regime hasn’t committed its own atrocities and peddled its own propaganda. It has.

Confirming events on the ground has become slightly easier since the UN observers arrived. And despite this photo fib, the Houla massacre does in fact appear to have taken place, probably committed by the regime, according to UN observers and witnesses. But this BBC controversy should make clear that the establishment media is not the vaunted authority they parade themselves to be and are just as much in the dark about things as the rest of us.