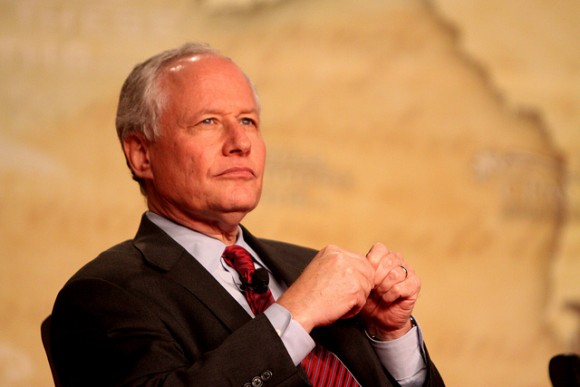 Bill Kristol is not shy about his fetish for war. His latest piece at the neoconservative Weekly Standard borders on self-parody in the way that it openly longs for a return to a time when Americans were eager to send the U.S. military off on unnecessary, imperialistic adventures.

Kristol is frustrated by the “war-weariness” of the nation. He laments the reluctance on the part of the Republican Party to “challenge” “the idol of war-weariness.”

“A war-weary public can be awakened and rallied,” Kristol cheers. “Indeed, events are right now doing the awakening. All that’s needed is the rallying. And the turnaround can be fast.”

People like Kristol are so blinded by ideology that they breach the etiquette which calls on elite commentators to camouflage their enthusiasm for war with superficial appeals to peace. He loves death and destruction and wars of choice and he doesn’t care who knows it! He is way out of the closet. That he can explicitly call for Americans to be “awakened and rallied” for new wars and not be embarrassed by the Hitler-esque tone of such despicable cravings is an indication of how lacking in self-awareness he is. His foreign policy beliefs are the kind that are not susceptible to reasoning or disconfirming evidence. His worship for the warfare state is religious in its persuasion.

Kristol condemns using war-weariness “as an excuse to avoid maintaining our defenses or shouldering our responsibilities.” In other words, the fact that Kristol’s preferred policies were implemented throughout the Bush administration and it led to war crimes, hundreds of thousands killed, trillions of dollars wasted, region-wide instability in the Middle East, and clear geo-political losses for the United States shouldn’t deter us from continuing to spend more than the rest of the world combined on our military or from “shouldering our responsibilities” of ruling the world through force and war.

To Kristol, war-weariness is a kind of ailment that Americans need to be cured of. He calls for war-weary Americans to be rallied to some unspecified military crusade just around the corner. Iran, Russia, China…anything will do, I suppose.

I’m reminded of what Noam Chomsky wrote in his book Media Control about this ailment, or “malady” of being averse to extreme violence and war.

“It’s very dangerous for a population to be overcome by these sickly inhibitions, as Goebbels understood, because then there’s a limit on foreign adventures,” he explains. “It’s necessary, as the Washington Post put it rather proudly during the [first] Gulf War hysteria, to instill in people a respect for ‘martial value.’ That’s important. If you want to have a violent society that uses force around the world to achieve the ends of its own domestic elite, it’s necessary to have a proper appreciation of the martial values and none of these sickly inhibitions about using violence.”

That’s the real threat of our resistance to extreme violence. Anything that puts a limit on foreign adventures is like kryptonite to Kristol and his ilk.