Maybe this is why they’re supporting a candidate that promises to bring them home?

American soldiers describe the constant stress of living in a war zone, voice their frustrations over the politics with the war strategy in Washington, and are seen as they watch an armored vehicle burn with six of their fellow troops trapped inside, in a rare and raw look at what American troops are experiencing on the front lines in Baghdad.

“I challenge anybody in Congress to do my rotation,” said Spc. Michael Vassell of Apache Company. “They don’t have to do anything, they just come hang out with me and go home at the times I go home, and come stay here 15 months with me.”

Apache Company was sent to Iraq in June 2006 for a 12-month rotation which has since been extended to a 15-month tour.

“It’s a joke. We will have spent 14 months in contact, basically fighting all 14 months,” said Cpl. Joshua Lake. “Our battalion got right to Baghdad â€¦ first week we were in Baghdad we lost two guys in our battalion â€¦ it hasn’t stopped since.”

“Because we have people up there in Congress with the brain of a 2-year-old who don’t know what they are doing — they don’t experience it. I challenge the president or anyone who has us for 15 months to ride alongside me,” Vassell said. “I [would] do another 15 months if he comes out here and rides along with me every day for 15 months. I’ll do 15 more months. They don’t even have to pay me extra.” 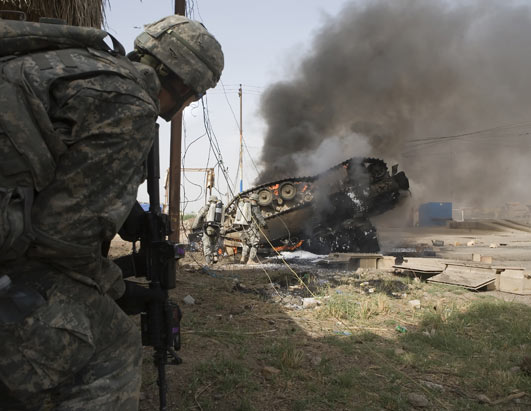 In this photo, six American soldiers and an Iraqi translator are burning to death inside the armored vehicle. Cpl. Joshua Lake from Apache Company told Sean Smith, “It’s a joke. We will have spent 14 months in contact, basically fighting all 14 monthsâ€¦first week in Baghdad we lost two guys in our battalion, and it hasn’t stopped since.”

This is an unusually hard-hitting article. Also, see the video on the upper right of the linked page and the rest of the photos here.