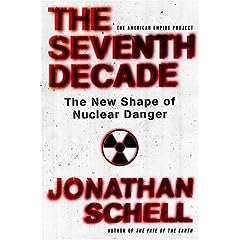 Jonathan Schell, columnist for the Nation and author of The Fate of the Earth, The Seventh Decade: The New Shape of Nuclear Danger, discusses his view that the people of earth are in great danger from nuclear weapons, his fear of Iran’s nuclear program and belief that bombing them is the worst way to keep them from making nukes, the theory of mutual assured destruction as applied to Iran, the call for a “preemptive” first strike on China back in the 60s and the U.S. and USSR’s pledge to disarm their nukes under the Non-Proliferation Treaty.

Jonathan Schell is the author of The Fate of the Earth, among other books, and the just-published The Seventh Decade: The New Shape of Nuclear Danger. He is the Harold Willens Peace Fellow at The Nation Institute, and a visiting lecturer at Yale University.

One thought on “Jonathan Schell”