Not much can top a federally-funded ACORN associate telling a (supposed) prostitute how she can launder her income — on camera. Except for maybe this: 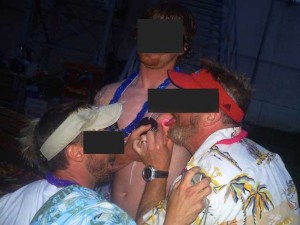 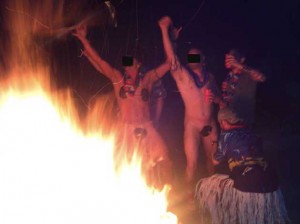 Those are guards from the federally-funded ArmorGroup, which has a $184 million contract to protect our embassy in Afghanistan. When these photos emerged from a FOIA request by the Project on Government Oversight (POGO), ArmorGroup fired 14 guards for a whole host of inappropriate, and perhaps even illegal activities. Subsequent reports indicate that the guards may have even been involved in running a prostitution ring.

According to Ryan Grim over at Huffington Post, the ironies have not been lost on Democratic lawmakers who have been whipsawed in recent days by legislation passed by the House and Senate to punish ACORN. TheÂ  House bill , however, would in essence de-fund any federally-funded organization guilty of a wide range of ethical and legal violations, including fraud. That, according to POGO, would apply not only to ACORN, but to possibly the ArmorGroup, and a long line of federal defense contractors, including tip-toppers like Northrop Grumman and Lockheed Martin. So far, they have identified 87 cases of fraud among 43 contractors.Â  Here’s the list — have fun.