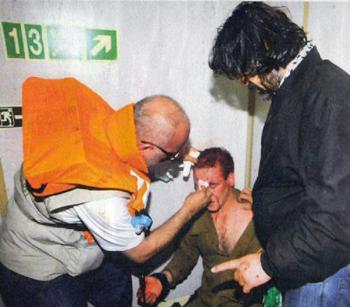 Via Ali Abunimah, the Turkish paper Hurriyet has posted a gallery of photos recovered from the passengers of the Mavi Marmara, the now-famous ship involved in last weekâ€™s flotilla incident. Another photo from the set, displayed here, has been posted on the Economistâ€™s Facebook page; it clearly shows the same commando and passenger as one of the other photos in the set. While we must be cautious about the authenticity of any of the information coming out about the flotilla attack, the IDF seems to concede to Haâ€™aretz that the photos are authentic: while attempting to spin the pictures, an IDF spokesperson did not dispute that they are real.

Taken together, the photos more or less definitively dispel the claim, advanced by the IDF and its media defenders, that the passengers aboard the ship were a â€œlynch mobâ€ determined to kill Israeli soldiers. On the contrary, the photos show that the passengers managed to capture Israeli soldiers and escort them below deck, where they would have had more than enough opportunity to kill them had they wanted to. Far from doing so, they actually helped treat the soldiersâ€™ wounds, as shown in the photo above.

The photos also lend support to the testimony of one of the passengers aboard the ship, former U.S. marine and Gulf War veteran Ken Oâ€™Keefe, who described the passengersâ€™ capture and subsequent treatment of three IDF commandos:

We had in our full possession, three completely disarmed and helpless commandos. These boys were at our mercy, they were out of reach of their fellow murderers, inside the ship and surrounded by 100 or more men. I looked into the eyes of all three of these boys and I can tell you they had the fear of God in them. They looked at us as if we were them, and I have no doubt they did not believe there was any way they would survive that day. They looked like frightened children in the face of an abusive father.

But they did not face an enemy as ruthless as they. Instead the woman provided basic first aid, and ultimately they were released, battered and bruised for sure, but alive. Able to live another day. Able to feel the sun over head and the embrace of loved ones. Unlike those they murdered. Despite mourning the loss of our brothers, feeling rage towards these boys, we let them go.

While the same caveats are in order regarding Oâ€™Keefeâ€™s testimony as regarding every other piece of information being released about the flotilla raid, the photos seem to verify his account. In any event, his testimony is worth reading in full.

The week since the Mavi Marmara incident has seen a dizzying amount of propaganda and misinformation released by the IDF and its supporters. There was the claim that the shipâ€™s passengers were â€œAl Qaeda mercenaries,â€ since retracted; the claim that Mavi Marmara passengers told an Israeli navy vessel to â€œgo back to Auschwitz,â€ already partially retracted and seemingly on its way to a full retraction; the claims that passengers had opened fire on the IDF commandos, now dropped without a trace. As more and more details emerge, it has come to appear that the initial image of the flotilla raid was in fact the correct one: namely, that the shipâ€™s passengers acted in self-defense after coming under surprise attack, and that despite the killing of at least nine of their fellows they resisted the urge to take retribution against the commandos.

Of course, all this must remain speculative, for the IDF has still refused to release its complete and unedited footage of the raid. Immediately after the attack, the IDF released a heavily edited clip that highlighted footage of passengers attacking commandos without showing what happened before or after. But if the facts of the raid are as clear and unambiguous as the IDF is suggesting, surely there is no reason to hold back on the full video. They have an opportunity to clear things up once and for all.