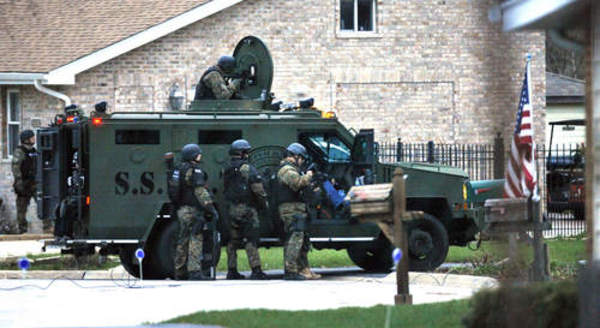 Found this over at CopBlock.org, one of the most fearless law enforcement watchdog sites I’ve ever come across. This “standoff” was staged recently by the South Suburban Emergency Response Team (SSERT) in Oak Forest, Illinois in response to a call from a “concerned friend” that a man might be fixing to do himself in with a gun. Turns out the man in question wasn’t home, but watching the entire thing from a bar stool at Beggar’s Bar. Says Copblock, ” Who can blame him for not telling the police, ‘hey, I am down at Beggar’s Bar’ when he can see on T.V. that several heavily armed men and their itchy trigger fingers have come to do what at most should have been a ‘wellness check.'”

Employees at the bar finally called when the news showed the 50 officers surrounding the property breaking the windows and inserting pepper spray into the home.

When it became apparent that (Mark) Fitch was not in the house the media began to call the whole thing a “hoax”, pinning the blame for the botched operation on Fitch, but even Chief Anderson explained that “He didn’t actually dupe us. He just was not in the house at the time when we thought he was based on the information – the best information we had at the time.” …..

…Despite the fact that even the Chief of Police has stated that Fitch did not commit a crime, the mayor and many residents want him to pony up for the cost of the standoff.  Estimates for the whole thing have been anywhere from $10,000-$75,000, mostly because of overtime pay for police officers.  Courts have rule over and over that the police have no obligation to protect someone, but bureaucrats like Mayor Hank Kuspa seem to think that when they do decide to respond to a call for help, even in the most ridiculous, over the top fashion, the person they were sent to help somehow has a obligation to pay for the cost of that response simply because he was not where the police believed him to be.

I suspect that their outrage is less about taxpayer’s money and more about the fact that the police looked foolish, not because of anything Fitch did, but because of their own over zealous use of their fancy toys.

Fancy toys indeed, the proliferation of which we have seen all over the country, in towns big and small, beginning during the Clinton administration when all that money started flowing through COPS (Community Oriented Policing) grants. It really surged with a vengeance after 9/11 — now law enforcement really had a reason to play Navy SEAL and G.I Joe. If you think it’ll ever go back to the way it was — 9/11 mastermind or no — we have a modest family home to sell you in Abbottabad.…