On Saturday, the day after Obama’s statement, my heart felt good as I introduced Representative Barbara Lee at a Los Angeles fundraiser. In the lightness of her mood I sensed a burden had been lifted from her heart as well.

Some of the hundred people in the room were baffled by the Obama withdrawal decision—understandably so, after a decade of several wars, a stolen election that led directly to Bush’s Iraq invasion….

This again? Who knew Tom Hayden was such a party man?

A certain jadedness has affected our consciousness after this very bad decade. Some people in the room didn’t believe Obama was actually going to pull out of Iraq. He would sneak in 5,000 manipulative mercenaries to take over from the last of the American troops. And what about those other wars? Wasn’t he worse than Bush? Yada yada yada, ad nauseam.

No, he’s swell, Tom. A real champion of the little guy.

Anyone paying attention (which, it turned out, was not too many) could see that Obama was “leading from behind,” in a political sense, on both Iraq and Afghanistan. In Bob Woodward’s history Obama’s Wars, the president is quoted as saying in private, “I can’t lose the whole Democratic Party.” … 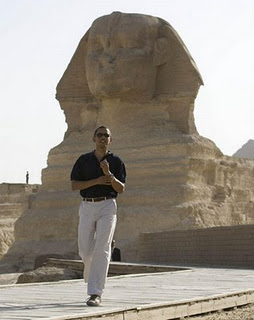 The resemblance is uncanny.

We will never know—cannot know and perhaps should not know—what is in a president’s mind, a kind of computer that is storing, retrieving, sending and deleting all at the same time, delivering outcomes that are a mixture of desire, presentation and necessity, all with an inaccessible hard drive. …

Never making a definitive statement, Obama, like the Sphinx…

OK, I’m just going to stop there, but read the rest if you must.