The Los Angeles Times has released just two of 18 photographs depicting U.S. soldiers posing happily next to Afghan corpses, or pieces of bodies. As with previous such incidents, the dehumanization of the “enemy” – a virtual necessity in war – runs deep.

Other unreleased photos show “Two soldiers posed holding a dead man’s hand with the middle finger raised. A soldier leaned over the bearded corpse while clutching the man’s hand. Someone placed an unofficial platoon patch reading “Zombie Hunter” next to other remains and took a picture.”

The Army of course promised to “take appropriate action” against those involved, just after reciting the same line about how this isn’t representative of the rest of the soldiers. These are hard to listen to when news of such behavior is anything but new. It’s worth noting also that the U.S. military officials the Times approached to ask questions about the photos before their release, requested they not be published. Big surprise there.

The release of the images comes at a time when the Obama administration is losing its grip on the war. The last few months have held a number of high-profile failures and embarrassments. First, a video went viral depicting U.S. soldiers urinating on Afghan corpses. After that, the controversy over the U.S. Army’s burning of Muslim holy books sparked country-wide protests and violence. Then Staff Sgt. Robert Bales (& Co.) slaughtered 17 Afghan civilians in an unprovoked massacre of men, women, and children. Just last weekend, insurgents mounted spectacular coordinated attacks that set off an 18-hour battle with NATO forces, an indication of their annual spring offensive and a public relations embarrassment for the U.S. at what seems to be the lowest point in the war. 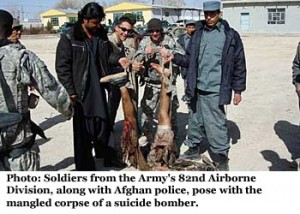 Posing with dead, tortured Muslims or their body parts is an all-too-common exercise in the military since 9/11 – whether in the Abu Ghraib torture dungeon, the urban kill zones of Iraq, or the arid plains of blood-soaked Afghanistan. But it’s not just smiling and flashing a thumbs up for the camera, it’s killing civilians. The “Kill Team” in Afghanistan, the army unit that planned and committed executions of multiple innocent, unarmed Afghan civilians, framed the dead as having been a threat and mutilated their corpses as trophies. They also took photos of their gruesome escapades.

The lives of Afghans, insurgents or not, become less valuable than other human lives, like last October when American troops forced civilians to march ahead of them on roads believed to have been filled with bombs and landmines planted by insurgents. On routine house searches, writes formerly embedded journalist Neil Shea, U.S. soldiers would demolish the home and its contents for the fun of it.

War requires dehumanizing some enemy. The enemy becomes not only less than human, but also the origin of all your troubles. Nazis managed to proliferate this feeling towards Jews. But its prevalent in all of America’s wars as well.

Americans became aggressively anti-German during the First World War. In 1918, for example, a mob in St. Louis attacked a German immigrant named Robert Prager, who had tried to enlist in the Navy. They beat him up, wrapped him in the American flag, and lynched him. A jury found the mob leaders not guilty, citing a case of what they called “patriotic murder.”

U.S. troops fighting the Japanese in WWII commonly mutilated their corpses, severing their body parts to take as “war trophies,” just as the Kill Team did with Afghans. One famous photograph shows a decapitated Japanese head hung on a tree after a battle with American soldiers. Crimes by both sides served to intensify the dehumanization on both sides.

Psychologist Philip Zimbardo calls this part of the Lucifer Effect. “At the core of evil,” he writes, “is the process of dehumanization by which certain other people or collectives of them, are depicted as less than human, as non comparable in humanity or personal dignity to those who do the labeling…Discrimination involves the actions taken against those others based on the beliefs and emotions generated by prejudiced perspectives.”

Dehumanization is “fundamental to a nation’s public support for war,” writes Kimberly Elliot, “Dehumanizing others renders the requisite horrors of war tolerable.” Soldiers as well as American citizens have to go through indoctrination about the strategic justifications for war, which have all but evaporated in Afghanistan, as well as indoctrination about who it is we’re fighting. That such indoctrination has to occur for the war to be fightable is a good indication that it isn’t worth another second of anybody’s life.

Update: At the Daily Beast, Harry Siegel, a war photographer who has published his own images of U.S. soldiers smiling with “war trophies,” says “these types of acts are more commonplace than we think.”

87 thoughts on “Posing With the Dead, Dehumanizing the ‘Enemy’”