Thomas Ricks argues in the New York Times that we should reinstate military conscription (via Chris Preble). He quotes Gen. Stanley McChrystal, who thinks risk of death ought to be thrust on all Americans if the criminals in government decide they want to make war. “I think if a nation goes to war, every town, every city needs to be at risk,” McChrystal said at the Aspen Ideas Festival. “You make that decision and everybody has skin in the game.” 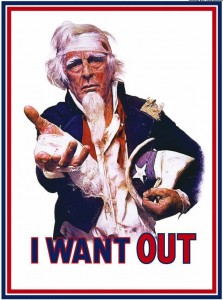 And libertarians who object to a draft could opt out. Those who declined to help Uncle Sam would in return pledge to ask nothing from him — no Medicare, no subsidized college loans and no mortgage guarantees. Those who want minimal government can have it.

I’m charmed that Ricks is thinking of libertarians. But if opting out of the draft means opting out of state services, I hope I can also opt out of paying for them and of being a subject of His Majesty Uncle Sam. (By the way, is there anything more revolting than a cartoon caricature of the state like Uncle Sam? It smacks of attracting children to smoke by advertising with Joe Camel.)

Emma Goldman used to say that the draft was a direct violation of the Thirteenth Amendment’s prohibition against slavery and involuntary servitude. Murray Rothbard, of course, said conscription “is slavery pure and simple, and because slavery is a moral evil; to use slavery in order defend the ‘free world’ is a grisly joke.”

44 thoughts on “The Military Draft is ‘Slavery Pure and Simple’”