After almost four decades, the US has agreed to help Vietnam clean up the deadly poison sprayed all over the country from 1961-1971, Agent Orange. While Washington was needlessly laying waste to the Vietnamese people, they claimed to use the dangerous herbicide to sweep away the heavy vegetation in the jungle and expose the Viet Cong. Honest people had a different way to describe it: chemical warfare. 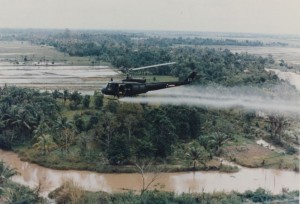 “One scientific study estimated that between 2.1 million and 4.8 million Vietnamese were directly exposed to Agent Orange,” according to one Congressional Research Service report. “Vietnamese advocacy groups claim that there are over three million Vietnamese suffering from serious health problems caused by exposure to the dioxin in Agent Orange.”

Here’s how the AP story begins:

Vo Duoc fights back tears while sharing the news that broke his heart: A few days ago he received test results confirming he and 11 family members have elevated levels of dioxin lingering in their blood.

The family lives in a two-story house near a former U.S. military base in Danang where the defoliant Agent Orange was stored during the Vietnam War, which ended nearly four decades ago. Duoc, 58, sells steel for a living and has diabetes, while his wife battles breast cancer and their daughter has remained childless after suffering repeated miscarriages. For years, Duoc thought the ailments were unrelated, but after seeing the blood tests he now suspects his family unwittingly ingested dioxin from Agent Orange-contaminated fish, vegetables and well water.

Dioxin, a persistent chemical linked to cancer, birth defects and other disabilities, has seeped into Vietnam’s soils and watersheds, creating a lasting war legacy that remains a thorny issue between the former foes. Washington has been slow to respond, but on Thursday the U.S. for the first time will begin cleaning up dioxin from Agent Orange that was stored at the former military base, now part of Danang’s airport.

Duoc responded to the news thusly: “”It’s better late than never.” Some might say that’s an incredibly forgiving way to react to war crimes that killed millions of his own people and caused his entire immediate family to suffer all their lives.

Duoc might have responded more cynically had he been informed about the reasons the US finally agreed to the clean-up. AP continues:

The $43 million project begins as Vietnam and the U.S. forge closer ties to boost trade and counter China’s rising influence in the disputed South China Sea.

So instead of the federal government coming to their senses about the need to do something about their poisoning of several generations of innocent Vietnamese, they agreed to the clean-up as part of their selfish, power-seeking statecraft against a rising China. It just doesn’t get vulgar than that.

25 thoughts on “Cleaning Up Agent Orange, For All the Wrong Reasons”