From the newest issue of Foreign Affairs, How China Sees America by Andrew J. Nathan and Andrew Scobell has some valuable insights. The diplomatic relationship between the US and China has soured recently, due especially to President Obama’s bellicosity in the Asia Pacific region and the indelible need to invent a Chinese threat that isn’t there. 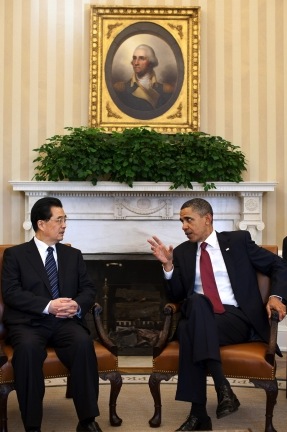 As I’ve written, it’s important to see how China perceives the US generally and specifically regarding the Obama administration’s so-called “Asia-Pivot,”  an aggressive policy that involves surging American military presence throughout the region with the aim of containing China’s rise. According to Nathan and Scobell, the Chinese see the US “a revisionist power that seeks to curtail China’s political influence and harm China’s interests.” Chinese analysts see the US “as militaristic, offense-minded, expansionist, and selfish.” And more specifically to the Asia-Pivot, America’s “real purpose is not to protect so-called human rights but to use this pretext to influence and limit China’s healthy economic growth and to prevent China’s wealth and power from threatening [their] world hegemony,” according to Li Qun, “a member of the Shandong Provincial Party Committee and a rising star in the Communist Party.”

If this is how our policies are viewed, how do we expect Chinese policymakers to react? Washington has been building new military bases and refurbishing old ones in the region in order to lay the ground-work for an “air-sea battle” with China. The idea is to have enough US bases peppered throughout the region so that China would be too surrounded to safely attack. How might America react to such unprovoked bellicosity?

What is more revealing in the piece, I think, is how the US sees China. As Li Qun explained, US foreign policy is far removed from the rhetoric that offers it the pretext. According to Nathan and Scobell, “China is the only country widely seen as a possible threat to U.S. predominance. Indeed, China’s rise has led to fears that the country will soon overwhelm its neighbors and one day supplant the United States as a global hegemon.” They add that America “is the most intrusive outside actor in China’s internal affairs, the guarantor of the status quo in Taiwan, the largest naval presence in the East China and South China seas, the formal or informal military ally of many of China’s neighbors, and the primary framer and defender of existing international legal regimes.”

Washington doesn’t view China as an actual threat to the security of America or as some kind of rogue state that needs discipline. China’s big economy and growing influence are considered a threat to US dominance, and therefore cannot stand. Few areas of our foreign policy statecraft are as transparently vulgar as with China. And how could we blame the Chinese for being unwelcoming when US military forces have “massive firepower all around the Chinese rim”?

The U.S. Pacific Command (PACOM) is the largest of the United States’ six regional combatant commands in terms of its geographic scope and nonwartime manpower. PACOM’s assets include about 325,000 military and civilian personnel, along with some 180 ships and 1,900 aircraft. To the west, PACOM gives way to the U.S. Central Command (CENTCOM), which is responsible for an area stretching from Central Asia to Egypt. Before September 11, 2001, CENTCOM had no forces stationed directly on China’s borders except for its training and supply missions in Pakistan. But with the beginning of the “war on terror,” CENTCOM placed tens of thousands of troops in Afghanistan and gained extended access to an air base in Kyrgyzstan.

The operational capabilities of U.S. forces in the Asia-Pacific are magnified by bilateral defense treaties with Australia, Japan, New Zealand, the Philippines, and South Korea and cooperative arrangements with other partners. And to top it off, the United States possesses some 5,200 nuclear warheads deployed in an invulnerable sea, land, and air triad. Taken together, this U.S. defense posture creates what Qian Wenrong of the Xinhua News Agency’s Research Center for International Issue Studies has called a “strategic ring of encirclement.”

The China issue in US foreign policy is likely to develop gradually, but nobody should be surprised if, a few years down the line, this bellicosity produces grave consequences or even an open conflict in Asia-Pacific. The Middle East will remain the preeminent geo-political focal point of Washington’s imperial policy for the foreseeable future, but Asia-Pacific could be the next theater of war to feed America’s martial addiction.

17 thoughts on “How America Sees China”