Micah Zenko at the Council on Foreign Relations lists Mitt Romney’s apparent foreign policy principles vis-a-vis his foreign policy speech from yesterday. In part, Zenko’s impressions are compatible with what I wrote about Romney’s speech: that it suggested little to no substantive difference with that of Obama’s. Zenko writes that “Romney’s proposed foreign policy is as detailed as a book cover without the table of contents and supporting text,” and that “voters can assume that a President Romney’s foreign policy would actually closely resemble President Obama’s.” 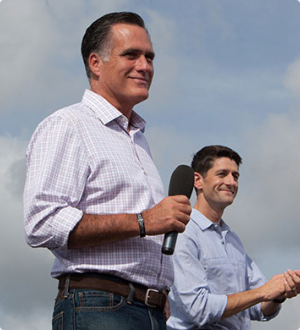 But Zenko notes a broader, less tangible aspect of Romney’s world view that we got a glimpse of yesterday:

Finally, however, the main distinction is Romney’s repeated conviction that it is the duty and responsibility of the United States to shape and lead the world, which is desperate to be shaped and lead by Washington. “There is a longing for American leadership in the Middle East,” Romney said yesterday. It is exactly this flawed mindset that has repeatedly begot trouble in the past, particularly in the Middle East. This dual belief in U.S. influence and the global craving for U.S. leadership could be dangerous, if Romney acts on its implications.

In other words, Romney wishes to rule the world; to be Commander and Chief of the Earth, not just of the United States. This is consistent with what most people have been able to gather about Romney up to now: he is transparently in this for the fame and power. A political career filled with multiple contradictory convictions, held and espoused depending on when it furthers his quest for ever higher political offices, is the best indicator of this.

Past American Presidents have been equally power-hungry as Romney, but they’ve often had a basic understanding that other nations follow their own interests. If Romney truly does think it’s America’s duty to rule the world, and that the other subordinate nations desperately want to be ruled over, then it will manifest in some ugly ways.

Either that, or this is – yet again – merely one version of Romney that Americans are now being exposed to because it currently suits him politically.

7 thoughts on “Romney, Candidate for Power”