This is not the first time this has happened:

Two US servicemen were arrested Tuesday on suspicion of gang-raping a Japanese woman in Okinawa, reports said, as anti-American feeling runs high on the strategically vital island.

The incident comes amid swelling protests over the recent deployment on the island of 12 Osprey transport aircraft, with the plane’s perceived poor safety sparking concern among local residents.

…One of sailors admitted carrying out the attack, but the other has denied it, according to TV Asahi. 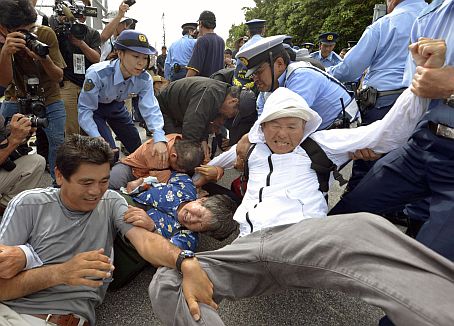 Tens of thousands of US troops have been stationed in Japan since WWII, and the local population has been firmly against the occupation with frequent protests urging their removal. Up to 85% of the Okinawan population wants US troops out. Not only do they not want to be occupied by a foreign military, but they’re fed up with the outrageous behavior of the American Marines. Between 1972 and 2009, there were 5,634 criminal offenses committed by US servicemen, including 25 murders, 385 burglaries, 25 arsons, 127 rapes, 306 assaults and 2,827 thefts.

Japanese leaders can’t submit to the will of the people on this issue for obvious reasons: the mafia don in Washington won’t allow it. “In 2010, Japanese Prime Minister Yukio Hatoyama pledged to relocate the U.S. base, then backtracked under US pressure,” reports the Washington Post. “Outraged Okinawans staged public protests, demonstrations spread to Tokyo, Hatoyama’s approval rating plummeted to 25 percent  and he resigned.”

Opposition to the U.S. base at Okinawa has been a big deal in Japan for years. “Local newspapers in Okinawa, which are strongly anti-base, give intense coverage to crimes by American military personnel and their families,” the New York Times explained. It’s also about the base itself, which is in the middle of a dense residential neighborhood and surrounded by schools. The recent arrival of new American aircraft, the tiltrotor V-22 Osprey, which locals believe is too dangerous, provoked “unexpectedly fierce opposition.” And maybe it shouldn’t be surprising that this historically nationalist society isn’t crazy about an enormous foreign military presence on its soil.

The bases in Japan were some of the most important Far East outposts in the American Empire in the years following WWII, and they’ve retained their geo-political importance to those in Washington who demand having military bases the world over. But the bases in Japan have garnered renewed importance since President Obama announced his strategic pivot to Asia-Pacific. The base now serves as an important show of force to China, a country on the rise economically and militarily, which Washington wants desperately to contain.