Apparently there is controversy, even among like-minded non-interventionists, over Chuck Hagel’s rumored nomination to be Obama’s next Secretary of Defense. On the one hand, non-interventionists are excited by Hagel’s potential nomination to one of the highest offices in the country. Hagel has opposed the Iraq war, opposed the potential war against Iran while criticizing the economic sanctions, and perhaps most importantly he has admirably challenged the widespread reluctance (dare I say refusal) on the part of Congress to say anything critical of Israel, ever. 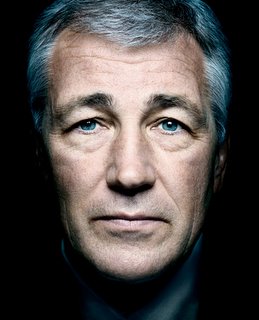 On the other hand, we’re talking about Hagel joining the Obama administration – the same coterie of brutes non-interventionists have been hammering these past four years on everything from expansive Great Game military policy in Asia, military surges in the Middle East, lawless drone wars, belligerence toward Iran, and unprecedented support for Israel. The vaunted second-term turn towards dovish foreign policies is largely a myth, and so Hagel’s seemingly impending nomination should be viewed with caution. It’s simply not likely that the Obama administration is getting ready to retreat from the distinct foreign policy it has developed in its first term.

Hagel, as I’ve noted a couple times in the past few days, has been repeatedly compared to Dwight Eisenhower. “Hagel is essentially an Eisenhower Republican,” writes Scott McConnell at The American Conservative, “a fiscal conservative, with combat experience in war, roots in the American heartland, and an awareness that it is far easier to get into wars than get out of them.” Sure, and while Eisenhower’s warning of the military industrial complex is a favorite of anti-war commentators, he still was the architect of post-WWII US foreign policy, which laid the groundwork for the imperial path we’ve been following ever since, and he did nasty things like overthrow democratically-elected governments and replace them with brutal dictators more subservient to US interests.

It is a sign of improving times that Hagel may soon be in the same seat Rumsfeld and Panetta previously occupied. But my guess is that the Obama administration is looking at Hagel not as an introduction to a significantly less interventionist foreign policy, but rather as a shrewd political choice to neuter Republican opposition on impending cuts in defense spending. Since Obama’s reelection, the focus has all been on the looming fiscal cliff, and Hagel’s potential nomination might be best understood in that context. According to The New York Times, “in internal discussions, White House officials have said that the challenge of the next few years will be working with Congress to shrink the defense budget and kill some major cold war-era weapons systems. For that, Mr. Hagel, a Republican from Nebraska, is seen as better able to win votes from his former colleagues.” 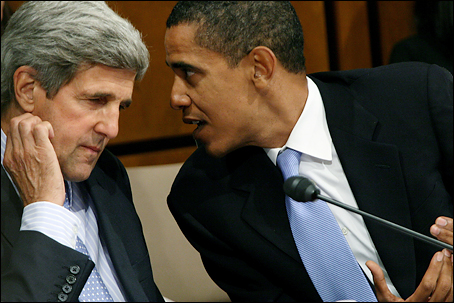 The other mitigating factor in the Hagel-mania should be John Kerry’s seemingly imminent nomination to Secretary of State. Yes, Kerry decided, after-the fact, to oppose the Iraq war and run against the uber-imperialist neo-conservative George W. Bush in 2004. But anyone doubting Kerry’s own imperialist credentials need only look at my blog post from back in June after the Senate Foreign Relations Committee, of which Kerry is the chairman, released a report on what I called “Imperial Balancing.”

The Senate Foreign Relations Committee just released a report [PDF] on US policy in the Middle East. Much of the study describes how Washington will maintain key military bases and troop presence throughout the entire region and how to overcome challenges to maintaining such dominance, which is vital because the region is “home to more than half of the world’s oil reserves and over a third of its natural gas.”

One excerpt stuck out in which the Committee admits that US military presence in the region as well as US support for brutal dictatorships has generated widespread hatred and blowback. According to the report, the challenge is to maintain the imperial dominance over the region, but avoid the messy “backlash” and embarrassing support for “human rights abuses.”

Here are some choice excerpts from that report:

The United States must carefully shape its military presence so as not to create a popular backlash, while retaining the capability to protect the free flow of critical natural resources and to provide a counterbalance to Iran. Earlier American deployments in Saudi Arabia and Iraq generated violent local opposition. What the West views as a deterrent against aggression could also be misconstrued or portrayed as an occupying presence.

…The United States should preserve the model of ‘‘lily pad’’ bases throughout the Gulf, which permits the rapid escalation of military force in case of emergency. The Obama administration has adopted this architecture by retaining only essential personnel in the region while ensuring access to critical hubs such as Camp Arifjan [in Kuwait], Al Udeid [Qatar], Al Dhafra [in the UAE], Jebel Ali [in the UAE], and Naval Support Activity Bahrain. An agile footprint enables the United States to quickly deploy its superior conventional force should conflict arise, without maintaining a costly and unsustainable presence. Sustaining physical infrastructure and enabling functions such as intelligence, surveillance, and logistics, while keeping certain war reserve materiel forward positioned, is more important than deploying large numbers of U.S. forces.

Preserving the model of “lily pad” bases peppered throughout the Gulf, which are afforded to Washington because it bribes undemocratic regimes with money and weapons, is how Washington maintains overweening power over the most geo-politically vital region in the world. This has been US policy since WWII, as a Top Secret National Security Council briefing put it in 1954, “the Near East is of great strategic, political, and economic importance,” as it “contains the greatest petroleum resources in the world” as well as “essential locations for strategic military bases in any world conflict.” After Obama administration failed in its efforts to maintain a large contingent of US forces in Iraq, following their predecessors launching of a criminal war there, Secretary of Defense Leon Panetta said he envisions about 40,000 troops will be stationed in the Middle East going forward.

Not only does this lead to US support for all kinds of repression and state terror, but it is detrimental to US security in the long term. The “backlash” the Committee is so worried about cannot be avoided and the veritable garrisoning of Iran’s surroundingsmakes the Islamic Republic more guarded, which amplifies tensions and increases the likelihood of unnecessary conflict. The alternative, minding our own business, is incomprehensible.

So while Hagel could potentially bring a stronger realist, willing-to-criticize-Israel voice to the higher echelons of the Obama administration, I predict he will not bring appreciable change. The Obama administration, in some ways, has already exhibited more foreign policy restraint than their predecessors in some important ways. There is much to criticize Obama for on, say, Iran or Syria policy – but both cases have been colored by his apparent reluctance to get bogged down in another massive ground war and occupation in the Middle East. That is already a departure from the war-mongers in the Bush administration, many of whom now are calling for bombing Iran and intervening directly in Syria. Hagel, himself no anti-interventionist, won’t change that one way or the other.

The Obama administration’s central foreign policy goal of maintaining global hegemony through unaccountable aggression and imperial policies the world over will proceed in the second term. Hagel or no Hagel.