According to recently released documents, the federal government monitored the Occupy Wall Street movement from its very inception, internally referring to it as a potential criminal and terrorist threat despite acknowledging the movement’s explicit rejection of violent forms of protest. 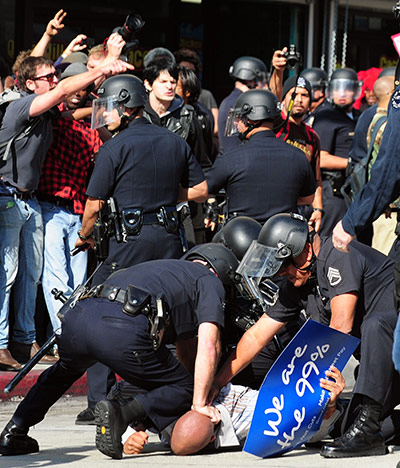 Via BoingBoing’s Xeni Jardin, the Partnership for Civil Justice Fund (PCJF) obtained through a Freedom of Information Act request documents that “reveal that from its inception, the FBI treated the Occupy movement as a potential criminal and terrorist threat even though the agency acknowledges in documents that organizers explicitly called for peaceful protest and did ‘not condone the use of violence’ at occupy protests.”

This is yet another example of how the federal government often views peaceful political activism as a threat, even a “terrorist” threat, and thus engages in covert surveillance and even physical aggression against them.

In October, the Senate Homeland Security subcommittee reviewed more than 600 reports that had come out of domestic surveillance centers and found that the government spy networks snooped on political activists and infiltrated groups that were peacefully exercising their constitutional rights to free speech, as opposed to fighting terrorist threats.

“The centers have made headlines for circulating information about Ron Paul supporters, the ACLU, activists on both sides of the abortion debate, war protesters and advocates of gun rights,” according to the Associated Press.

The FBI caught flack last year too when a massive probe into antiwar activists was revealed, as this Washington Post article explained:

The search was part of a mysterious, ongoing nationwide terrorism investigation with an unusual target: prominent peace activists and politically active labor organizers.

…The apparent targets, all vocal and visible critics of U.S. foreign policy in the Middle East and South America, deny any ties to terrorism. They say the government, using its post-9/11 focus on terrorism as a pretext, is targeting them for their political views.

The documents obtained by PCJF are even more revealing than that, though. They show that the federal government cooperated with local law enforcement and major financial institutions of the kind Occupy was protesting against in order to crack down on the peaceful activism. Jardin:

According to the PCJF, the papers show the government partnered in this crackdown effort with financial institutions through the Domestic Security Alliance Council, an entity created by the FBI in 2005 that “enhances communications and promotes the timely and bidirectional effective exchange of information keeping the nation’s critical infrastructure safe, secure and resilient.”

And here is PCJF:

The PCJF has obtained heavily redacted documents showing that FBI offices and agents around the country were in high gear conducting surveillance against the movement even as early as August 2011, a month prior to the establishment of the OWS encampment in Zuccotti Park and other Occupy actions around the country.

“This production, which we believe is just the tip of the iceberg, is a window into the nationwide scope of the FBI’s surveillance, monitoring, and reporting on peaceful protestors organizing with the Occupy movement,” stated Mara Verheyden-Hilliard, Executive Director of the Partnership for Civil Justice Fund (PCJF).  “These documents show that the FBI and the Department of Homeland Security are treating protests against the corporate and banking structure of America as potential criminal and terrorist activity.  These documents also show these federal agencies functioning as a de facto intelligence arm of Wall Street and Corporate America.”

“The documents are heavily redacted, and it is clear from the production that the FBI is withholding far more material. We are filing an appeal challenging this response and demanding full disclosure to the public of the records of this operation,” stated Heather Benno, staff attorney with the PCJF.

Read the bullet point summaries at the PCJF site for a fuller understanding of how big banks colluded with big government to monitor and disrupt the Occupy movement. The FOIA’d documents can be read here.

Update: The New York Times has picked up the story, reporting that the FBI “used counterterrorism agents to investigate the Occupy Wall Street movement, including its communications and planning.”  The emphasis here is important: note how the war on terrorism – presumably as far removed from a young semi-anarchist movement decrying the bankers’ state-granted privileges as can be imagined – is used as a blanket excuse for the government to control and suppress American citizens. Post-9/11 powers granted to the state in the context of fighting small groups of Arab Muslim militants plotting terrorist attacks against the US, are instead used to target politically active American citizens who have literally zero relation or connection to anything resembling “terrorists.”

The FBI apparently released a statement on the FOIA’d documents:

A spokesman for the F.B.I. in Washington cautioned against “drawing conclusions from redacted” documents.

“The F.B.I. recognizes the rights of individuals and groups to engage in constitutionally protected activity,” said the spokesman, Paul Bresson. “While the F.B.I. is obligated to thoroughly investigate any serious allegations involving threats of violence, we do not open investigations based solely on First Amendment activity. In fact, the Department of Justice and the F.B.I.’s own internal guidelines on domestic operations strictly forbid that.”

But Mara Verheyden-Hilliard, executive director of the Partnership for Civil Justice Fund, said the documents demonstrated that the F.B.I. had acted improperly by gathering information on Americans involved in lawful activities.

As is the case with virtually all cases of government surveillance of American citizens, we’re asked to trust that the spies possess a deep respect for the law, and observe it accordingly. Redactions and all.