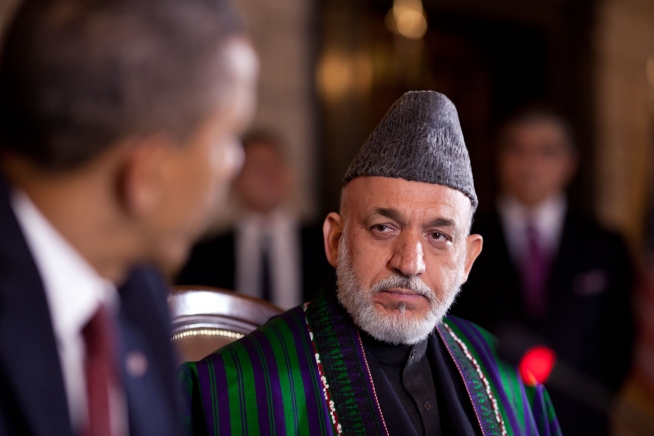 Retired Lt. Gen. David W. Barno, now at the Center for a New American Security, writes at Foreign Policy on Hamid Karzai’s upcoming visit to Washington to discuss with the Obama administration a status of forces agreement for Afghanistan beyond 2014. He argues it’s possible a complete withdrawal is a viable option.

The top US military general in Afghanistan, John Allen, has recommended keeping 6,000-20,000 US troops in country after the vaunted and wildly misrepresented 2014 “withdrawal.” Anonymous administration officials told Reuters Obama is quietly considering slightly less troops to stay beyond 2014, with numbers like 3,000-9,000 floating about.

But Barno says the “zero option,” which ultimately was chosen for Iraq despite administration efforts to keep thousands of troops there in a new status of forces agreement, is sitting in the back of Obama’s mind as one possible option.

Karzai comes to this week’s discussions convinced that the United States desperately needs long-term military bases in Afghanistan. He sees an America without other viable options to maintain its regional influence, cajole Pakistan, threaten Iran, or launch raids against nearby terrorists. Because of this, Karzai thinks that he holds all the cards in the upcoming negotiations. He is absolutely convinced that the United States has no workable strategic choice but to station substantial U.S. troops in Afghanistan after 2014.

“But Karzai has it wrong,” Barno says, for at least five reasons: (1) pullout worked ok for Iraq; (2) budgetary pressure; (3) the war weariness of the American publish; (4) US capacity to handle Afghanistan remotely; and (5) a covert intelligence war may be better than keeping troops if we get backed into a corner on a SOFA.

I see Barno’s point, and I think his five reasons are fair, but I don’t buy it. He counters his own argument more than he supports it. He admits that, absent US troops Afghanistan would descend into civil war with a probable return of the Taliban, Washington’s ability to contain Pakistan and launch drone strikes in the tribal regions would be significantly undermined, etc. I don’t expect the Obama administration to risk these scenarios.

But there are more reasons the “zero option” isn’t going to happen this time around. Afghanistan is not Iraq. With Iraq, you had a more stable and independent government that was defiant of US encroachment. That was the driving force behind Maliki’s inability/refusal to produce an acceptable SOFA to the US. In Afghanistan, Karzai’s government is extremely weak and barely operational on its own – that is, without the support of thousands of US troops and billions in foreign aid. Yes, Karzai has demonstrated his own limited defiance of Washington, but I doubt it will hold this time. He needs Washington to survive.

Secondly, Iraq was Bush’s war. Obama followed through on the SOFA signed under Bush. The immediate political costs of a full withdrawal seemed to rest much less on Obama’s shoulders in that case. Afghanistan is different. That is Obama’s war; he decided to surge in 2009, he owns it. And he’ll therefore be more concerned with Afghanistan for the long term and less inclined to pull out.

At least, that is how I speculate the administration sees it. It’s still the case that so long as any foreign occupation exists in Afghanistan, and so long as any Kabul government is propped up from abroad, the insurgency will remain alive and well. There are a host of bad options in Afghanistan and the reality is that a complete withdrawal now is the least bad, whether Obama sees it that way or not.

Update: Al-Jazeera reports that “A senior White House official has said the US would consider leaving no American troops in Afghanistan after the end of combat in December 2014.”

Asked whether Obama would consider a scenario in which all US troops left and there was no residual force in Afghanistan, Ben Rhodes, a deputy national security adviser said: “That would be an option we would consider.”

“We wouldn’t rule out any option. We are not guided by the goal of a certain number of troops in the country. We are guided by the objective that the president has set,” Rhodes told reporters.

I still find this incredibly unlikely. The Washington phrase “not ruling out any options” is a complicated one, to say the least.

122 thoughts on “Is Obama Entertaining a Complete Withdrawal From Afghanistan?”