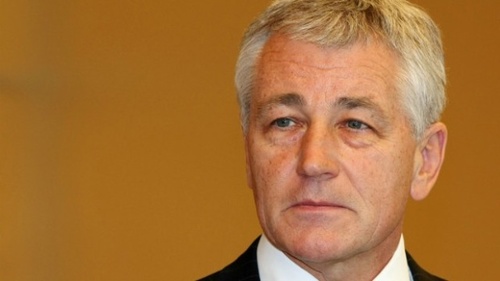 The Associated Press is reporting that “Chuck Hagel, is meeting with senior Pentagon staff to try to set the record straight about his stand on Iran, saying he backs strong international sanctions against Tehran and believes all options, including military action, should be on the table.”

As was eagerly pointed out in the pre-nomination debate over Hagel, his views on Iran have been pro-diplomacy and anti-war, throwing in a heavy skepticism about unilateral sanctions.

“Isolating nations is risky,” Hagel wrote in his 2008 book. “It turns them inward, and makes their citizens susceptible to the most demagogic fear mongering.”

Diplomacy, he wrote, is necessary to avoid war: “Distasteful as we may find that country’s rulers, the absence of any formal governmental relations with Iran ensures that we will continue to conduct this delicate international relationship through the press and speeches, as well as through surrogates and third parties, on issues of vital strategic importance to our national interests. Such a course can only result in diplomatic blind spots that will lead to misunderstandings, miscalculation, and, ultimately, conflict.”

Hagel even hints that containment of a nuclear Iran is preferable to war: “The genie of nuclear armaments is already out of the bottle, no matter what Iran does. In this imperfect world, sovereign nation-states possessing nuclear weapons capability (as opposed to stateless terrorist groups) will often respond with some degree of responsible, or at least sane, behavior. These governments, however hostile they may be toward us, have some appreciation of the horrific results of a nuclear war and the consequences they would suffer.”

These are the views Hagel caught flack for from the war-mongers in Washington. Those wondering what accounts for Hagel’s apparent abrupt switch shouldn’t be surprised: that’s politics.

On the one hand, I think the AP article describing Hagel as being suddenly supportive of an “all options, including military attack, being on the table” position may be misleading.

First of all, as my colleague Justin Raimondo pointed out in conversation, there isn’t a single direct quote from Hagel in the entire article. These are Pentagon officials and administration apparatchiks deliberately putting forth the Hagel they want the public to know.

Secondly, although I’ve never been in a presidential administration or sat in on conversations at the White House, it strikes me as obvious that “the administration” displays unity on the issues publicly, even if they vehemently disagree privately. That, to me, is a more likely explanation than to believe the caricature that Hagel opposed war on Iran the day before his nomination and supported it the day after.

And finally, while the Obama administration’s policy has been to continually regurgitate the euphemistic line for military attack – “all options on the table” – it’s policy on Iran thus far has decidedly been to avoid direct military action.

There is plenty to criticize the administration’s Iran policy for – I make a living doing just that. But to say the administration line is to bomb Iran back to the stone age, simply ignores the record. At the height of the war rhetoric on Iran in the last two years, Obama expended a certain amount of political capital by marching out his minions from Defense Secretary Leon Panetta to Director of National Intelligence James Clapper to Chairman of the Joint Chiefs of Staff Gen. Martin Dempsey to reiterate the fact that Iran has no nuclear weapons program, despite constant rhetoric to the contrary.

And when Israel was feverishly lobbying for a US-backed war on Iran, Gen. Martin Dempsey, America’s top military official who answers directly to President Obama, reiterated that the US would not be “complicit” in an Israeli strike, which he also explained would be counterproductive. Less than a week later, Israeli press reports came out saying the Obama administration sent a surreptitious message to Iran promising not to back an Israeli strike, as long as Tehran refrains from attacking American interests in the Persian Gulf.

In September, a report by former government officials, national security experts and retired military officers – people who generally reflect establishment views in DC like Zbigniew Brzezinski, Richard Armitage, Thomas Pickering, James Dobbins – concluded an attack on Iran would prompt large-scale Iranian retaliation that would spark an uncontrollable regional war. It said “achieving more than a temporary setback in Iran’s nuclear program would require a military operation – including a land occupation – more taxing than the Iraq and Afghanistan wars combined.”

Point being: Hagel’s position of multi-liateral sanctions and diplomacy – not war – are not as unwelcome in DC as some would have us believe.

So have Hagel’s views magically changed? I’d say no, not yet. But as Glenn Greenwald pointed out this morning, the example of Harold Koh and countless others proves that power in DC can and does intoxicate people, leading them to positions and policies wholly antagonistic to their previous iterations. If and when Hagel does turn, he’ll be as despicable as the rest who’ve done so.

20 thoughts on “Chuck Hagel: Toeing the Obama Line on Iran”