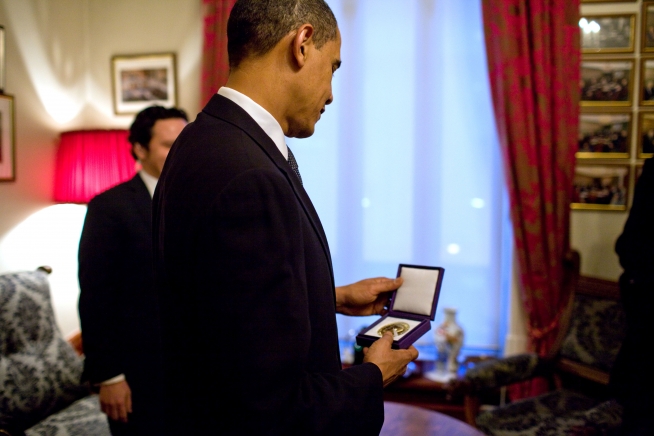 Article 33 of the Fourth Geneva Convention: “No general penalty, pecuniary or otherwise, shall be inflicted upon the population on account of the acts of individuals for which they can not be regarded as jointly and severally responsible.”

The Guardian reports that “Hundreds of thousands of Iranians with serious illnesses have been put at imminent risk by the unintended consequences of international sanctions, which have led to dire shortages of life-saving medicines such as chemotherapy drugs for cancer and bloodclotting agents for haemophiliacs.”

The key word there is “unintended.” The problem with describing it this way is that it isn’t accurate. Washington understands the consequences of the sanctions, and the same Guardian report acknowledges that the Obama administration has been made aware that hundreds of thousands of sick people in Iran have had their access to medicine restricted because of the sanctions. And they haven’t done anything about it.

“The west lies when it says it hasn’t imposed sanctions on our medical sector. Many medical firms have sanctioned us,” Naser Naghdi, the director general of Iran’s biggest pharmaceutical company, told the Guardian.

But sanctions aren’t just blocking much needed medical supplies; unemployment is rising and inflation is spiraling out of control. “Prices of fruit and sugar, among other staples, have soared – in some cases showing threefold and fourfold increases,” Saeed Kamali Dehghan wrote in the Guardian last summer. “The price of meat, an essential ingredient of Iranian food, has gone up to such an extent that many now eat it only on special occasions.”

“What is most concerning,” according to Trita Parsi, president of the National Iranian American Council, “is that it is now increasingly clear that the people are the target.” Parsi added that “in a non-democracy, such as Iran, the ability for people to pressure their government is limited,” and that “Many in Washington acknowledge that we are conducting economic warfare. That means the entire Iranian economy is the battlefield – and ordinary Iranians are [seen as] enemy combatants.”

Secretary of Defense Leon Panetta has admitted sanctions aren’t demonstrably changing the policies of the regime, but has insisted on their continuance nevertheless. As one of the top congressional supporters of sanctions, Rep. Brad Sherman (D-CA), said, “Critics [of the sanctions] argued that these measures will hurt the Iranian people.  Quite frankly, we need to do just that.” Or take Rep. Gary Ackerman (D-NY): “The goal … is to inflict crippling, unendurable economic pain over there. Iran’s banking sector — especially its central bank — needs to become the financial equivalent of Chernobyl: radioactive, dangerous and most of all, empty.”

We may be seeing this repeat in Iran. And for what? It can’t be punishment for a rogue nuclear weapons program: the US intelligence community has concluded it doesn’t exist. Whether the reason behind the sanctions are to placate Israeli security concerns or to block Iran’s regional influence, what matters is that this economic warfare is criminal; it violates the Fourth Geneva Convention.

But apparently President Obama – Nobel Peace Prize winner – doesn’t care about legally binding international treaties and conventional laws. Instead, he is busy implementing the collective punishment of Iranians for a crime they haven’t committed.