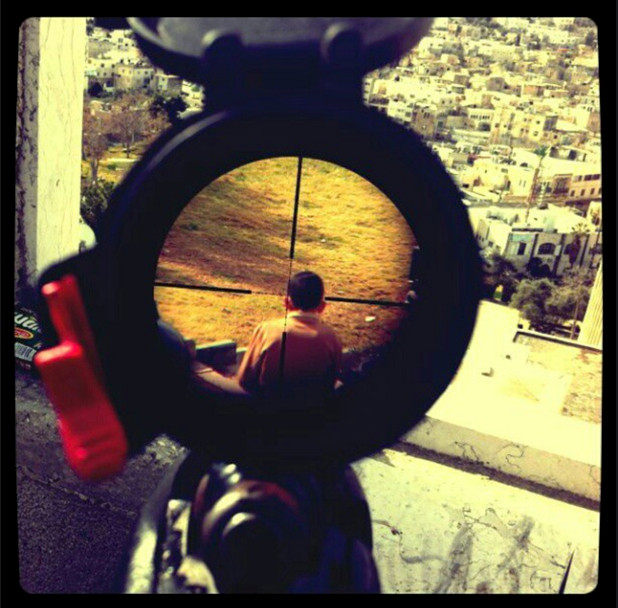 Electronic Intifada with the backstory:

This disturbing image shows the back of the head of a child or young man as seen in the crosshairs of a rifle. The photo was posted on the personal Instagram account of Mor Ostrovski, a 20-year old Israeli soldier in a sniper unit.

The context – particularly the character of the buildings seen in the background of the image – strongly suggests the child could be Palestinian.

There are no other images to suggest that the photographer actually fired at the person in the image in this case. The image is simply tasteless and dehumanizing. It embodies the idea that Palestinian children are targets.

It reminded me of a chilling account another Israeli soldier gave to the group Breaking the Silence about how Israeli soldiers in Nablus in 2006-2007 would deliberately fire at children, sometimes using live ammunition and sometimes rubber-coated steel bullets:

Where do you aim? Do you choose some kid at random?
Yes. Choose someone, aim at his body.
Body?
Center of mass.
10 meters’ range at the center of mass?
I remember one time we put a kid down. We didn’t kill him but someone hit the kid in the chest and he fell and probably lost consciousness, or at least, it was pretty close. About 10 meters.

The Israeli army has called this “a severe incident,” promising it “will be examined and properly handled.”

Somehow I’m doubtful. Palestinian children are frequently shot and killed by Israeli soldiers. In fact, such an incident is what ultimately led to the 2012 November-December Israeli assault on Gaza. In the days leading up to the pummeling of Gazans that winter, Israeli forces shot and killed 23 year old Ahmad Nabhani for daring to “approach the border fence with Israel.” According to at least one account, Nabhani was mentally challenged.

Three days later, Israeli forces shot and killed a 13-year old boy who was reportedly playing soccer near his home.

Just one month ago, the IDF shot a 16-year-old Palestinian boy in the West Bank in the back as he was retreating and killed him.  His name was Samir Awad. The IDF claimed Awad tried to breach the separation barrier Israel has built to help fortify their system of apartheid and land theft. However, Ayeed Mora, a member of the Budrus Popular Committee, told Haaretz at the time “that near the separation barrier that Israel built, IDF soldiers ambushed the youths and opened fire. There was no just cause to open fire, he asserts.”

What the Instagram picture represents is, unfortunately, an ordinary facet of the Israeli-Palestinian conflict. Dehumanization of “the other” is so deep and so pervasive, and the Israeli system of domination and abuse is so permeating, that horrors like this seem routine.