1. A member of a Communist apparat.
2. An unquestioningly loyal subordinate, especially of a political leader or organization

House Minority Leader Nancy Pelosi (D-CA) thinks we’d be asking too much of Obama if we demanded the President publicly acknowledge when he targets a US citizen for assassination. If President Obama wants to drop a bomb on an American with a drone in total secrecy, he should be able to do so. 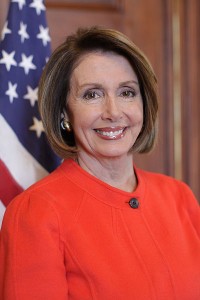 In an interview with the Huffington Post, Pelosi was asked whether “the administration should acknowledge when it targets a US citizen in a drone strike.”

“It depends on the situation,” she said. “Maybe it depends on the timing, because that’s right — it’s all about timing, imminence. What is it that could be in jeopardy if people know that happened at this time? I just don’t know.”

That’s right. She doesn’t know. Nor does anybody else because all of it is secret. The Obama administration, like every administration before it, keeps secret that which is legally and morally questionable, while justifying it with practiced tropes about “protecting sources and methods.”

Pelosi is erring on the side of deference. If Obama declares he will strip Americans of the Constitutional rights and that it needs to be secret because divulging such information could “harm national security,” she grants him that prerogative because she is not an independent voice in the branch of government meant to serve as a check on the President’s power. Instead, she is an apparatchik; she’s a Party mouthpiece faced with the task of capitulating to the Party leadership.

This is more of a distinction than you might think, because not all members of Congress are like this. Ron Wyden (D-OR) has been insisting that, “Every American has the right to know when their government believes it’s allowed to kill them.”

In direct response to Pelosi’s statements during an interview with The Washington Examiner, Sen. Mike Lee (R-Utah) said, “Anytime the government willfully executes a citizen, regardless of the circumstances, it is a very serious issue. As the body that oversees executive branch actions, at the very least, Congress should have a full accounting – even if it must sometimes be in a classified setting – of the specific considerations that went into the decision.”

Pelosi also “disputed the assertion that Democrats are less critical of the drone program than they would have been if George W. Bush were still president,” Huffington Post reports. This, despite the recent study that shows liberals are more likely to approve of the targeted killing program as long as a Democrat’s finger is on the trigger.

This month’s leak of a Justice Department white paper describing the administration’s legal rationale for executing Americans has put extra emphasis on Obama’s drone war, with many critical commentators pointing out how he has appointed himself Judge, Jury, and Executioner in the war on terror. This is a status quo Pelosi seems eager to uphold.

In January, US District Judge Colleen McMahon reluctantly granted the Obama administration’s request to throw out a case brought against it by The New York Times that would have forced more disclosures about the drone war.

The since oft-quoted statement she made in her decision was the following: “I can find no way around the thicket of laws and precedents that effectively allow the executive branch of our government to proclaim as perfectly lawful certain actions that seem on their face incompatible with our Constitution and laws while keeping the reasons for their conclusion a secret.”

But, as Marcy Wheeler has pointed out, McMahon also discussed original intent of the Constitution’s framers, citing Madison:

As they gathered to draft a Constitution for their newly liberated country, the Founders – fresh from a war of independence from the rule of a King they styled a tyrant – were fearful of concentrating power in the hands of any single person or institution, and most particularly in the executive. That concern was described by James Madison in Federalist No. 47 (1788):

The accumulation of all powers, legislative, executive, and judiciary, in the same hands, whether of one, a few, or many, and whether hereditary, selfappointed, or elective, may justly be pronounced the very definition of tyranny…

The magistrate in whom the whole executive power resides cannot of himself…administer justice in person, though he has the appointment of those who do administer it.

No dice, says Nancy. I will not perform my duty to check the President’s usurpations, says Nancy. Obama can do what he wants, and I’ll be an obedient little apparatchik.

36 thoughts on “Nancy Pelosi: Obama Can Execute Americans in Secret”