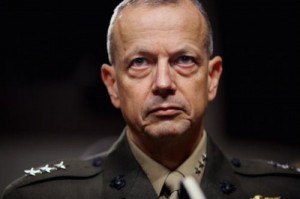 This week Marine Corps General John Allen joined a long and lamentable list of American leaders who have succumbed to the ancient affliction that conventional rhetoric has deemed the “graveyard of empires.” He is not the first, but given that the United States seems to be on a real trajectory — finally — for an exit out of Afghanistan, Allen may be the last who have broken vaunted career trajectories on the jagged cliffs of this war-ravaged land. A place, many say now, we should have left years ago rather than toiled away and spent so much blood and treasure to recreate, unsuccessfully,  in our own image.

That image has taken quite a thrashing since U.S forces first invaded this Central Asian tinderbox to destroy the Taliban, which sadly, Washington helped to birth 20 years earlier (at that time, it was the Soviets’ turn to crash and burn). What had been widely understood, right or wrong, as a mission to avenge 9/11 and to prevent another one from happening, quickly evolved into something not so easily defined: controversial, elusive, corruptive and dangerous. The U.S and allied partners dragged into this quagmire have lost 3,257 lives since 2001. Meanwhile, there is still no official count of the thousands of Afghan civilians killed or ultimately displaced by the 12 years of fighting. They, too , have been sucked into the sands of time, but no, not forgotten.

When Allen first took over command in 2011, he had big boots to fill in the person of Gen. David Petraeus, whose mythology far outsold his actual performance as commander of U.S and coalition forces in Afghanistan. If a frustrated, uninspired, reactionary tour marked by continued American casualties and no clear light at the end of the tunnel was the bar set by Petraeus, Allen certainly met it. However, Allen beat Petreaus on the time it took for him to first announce his retirement from the post  (last spring) — eight months into his commission.

And also like Petraeus, and Gen. Stanley McChrystal before him, Allen is ending his government career not unscathed by the taint of shame and embarrassment. He was caught up in the scandal that brought Petraeus down. Though a recent Pentagon report eventually found no conduct “unbecoming to an officer,” the married Allen took a big hit last fall when it was revealed that he had exchanged hundreds of emails (some supposedly racy and flirty) with a married Tampa socialite who spent a great deal of time cultivating self-interested relationships with top Army officers, including Petraeus. That whole tawdry tale was exposed when she went to the F.B.I complaining of threatening emails, which we now know to have been sent from the married Paula Broadwell, an acolyte and biographer and mistress of the married Petraeus.  So it wasn’t bullets nor battlefield defeat that brought these men down — including McChrystal who, in the rarefied air of his insulated world of self-importance and bravado, dressed-down the president and his men to the wrong reporter — it was hubris.

To say Allen’s surprise retirement from the Marines had nothing to do with all of this would be to ignore everything that had come before. He is walking away from a prestigious new commission as head of NATO. Ending his career here, right now,  is a curious decision.

Afghanistan is a timeless epic that unfolds in ways that only Shakespeare could do justice. And not only generals: a host of diplomats, from Ryan Crocker to the late Richard Holbrooke, have tried in vain to exercise onto this foreign land what on the outside world would’ve been considered peerless skills of statecraft, politics and negotiation. Dashed hopes, even death, was all it wrought.

There are so many reasons why the U.S did not “win” Afghanistan, but in this context it has certainly become a place where men who thought it would be a step toward both personal and career fulfillment, found it to be a graveyard instead.