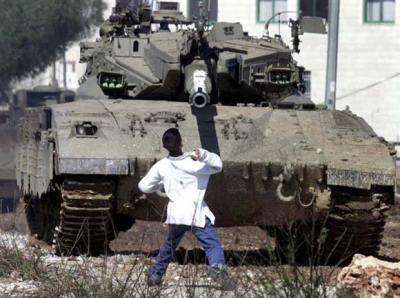 At the Daily Beast’s Open Zion blog, Yousef Munayyer responds to the recent gossip about another impending Palestinian uprising, or intifada. Any single incident of abuse could be the spark, he writes. Just to name a few off the top of his head:

There was the killing of 17 year-old, Mohamad Salaymeh, in December. Israeli soldiers shot and killed Lubna Hanash, a 22 year-old female, in Hebron last month. Then there are the regular attacks of settler violence against Palestinians like this shooting in Qusra last week. There is also the persistent Israeli firing into Gaza which has led to numerous Palestinian deaths and casualties since the “ceasefire.” Or the racist beating of a Palestinian man in Yaffa by a dozen or more Israeli Jews or the assault on a Palestinian women in Jerusalem. And, of course, the death of Arafat Jaradat, a 30 year-old Palestinian detained for allegedly throwing stones, only to have died days later in an Israeli prison after apparent torture.

But there is something curious about the worrywarts wondering if the next intifada is upon us:

The fear of an oncoming Intifada, so commonplace in Israeli and Western debates and policy discussion on the issue, underscores exactly how this discourse is problematically filtered through the prism of Israeli security alone. The State Department is now calling for “maximum restraint.” The Israeli prime minister’s office issued Mahmoud Abbas an “unequivocal demand to restore quiet.”

But the occupation itself is an intolerable and constant system of violence. It has been ongoing for decades, with episode after episode that could be a spark. Yet it is because an Intifada—or Palestinian uprising—is understood to mean that Israelis will face greater security risks, it suddenly generates urgency and fear. The message this sends is that only when Israeli security is challenged does the world seem to take note.

When Israel is at risk of having a few more stones thrown at it, or having more publicity of its apartheid system forced upon it – that’s when we have to worry. But the daily violence and oppression Palestinians face at the hands of the Israelis? That’s really nothing to be concerned with.

The other thing that amazes me about Israeli worries of an intifada is that Palestinian resistance is a predictable consequence of what they are doing. And, as a new EU report just reiterated , what they are doing is deliberately depriving Palestinians of their land, their livelihood, and their dignity.

17 thoughts on “Worrying About an Intifada”