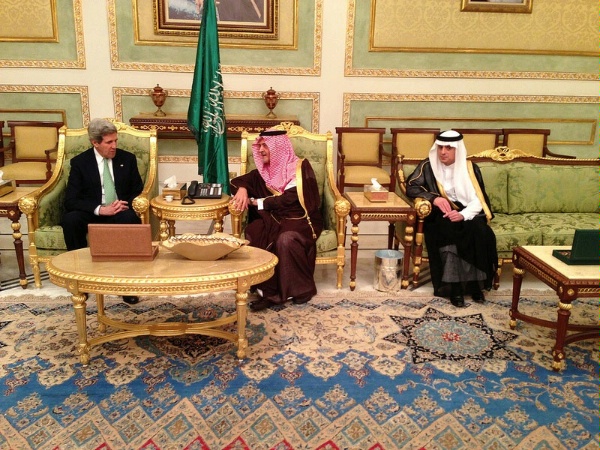 Secretary of State John Kerry stopped off in Saudi Arabia on Monday to stand united in the name of democracy in Syria. The Associated Press called it “a united front,” reporting that Kerry and Saudi Foreign Minister Prince Saud al-Faisal “warned Syrian President Bashar Assad that they will boost support to rebels fighting to oust him unless he steps down.”

You really have to swim through a lot of cognitive dissonance to understand how the secretary of state of the world’s only empire and the foreign minister of the Middle East’s worst dictatorship can stand united on bringing democracy to Syria.

Kerry said he and the Saudi FM “discussed the urgent need to bring an end to the bloody civil war in Syria and to promote peaceful, inclusive transition, and provide the Syrian people with the safety, security, justice, and freedom that they deserve.” He said he wanted to “make clear today that the United States will continue to work with our friends as we did in Rome to empower the Syrian opposition to be able to hopefully bring about a peaceful resolution, but if not, to continue to put pressure on Bashar Assad,” because he has “lost his legitimacy.”

Prince Saud said, “Morally, we have a duty to protect [the Syrian people],” claiming Assad is “diabolical” and “has lost all authority in that country.” He apparently forgot to mention how it is that the Saudi monarch has any legitimate authority in his own country.

The irony of all this was pointed out boldly by renowned Middle East journalist Robert Fisk not long ago. The Obama administration “say they want a democracy in Syria,” Fisk wrote. “But Qatar is an autocracy and Saudi Arabia is among the most pernicious of caliphate-kingly-dictatorships in the Arab world.”

“Rulers of both states inherit power from their families – just as Bashar has done – and Saudi Arabia is an ally of the Salafist-Wahabi rebels in Syria, just as it was the most fervent supporter of the medieval Taliban during Afghanistan’s dark ages,” he added.

So Kerry and Saud are playing chicken with Assad: ‘Step down from power or we’ll increase lethal support to the rebels.’ Put differently, the policy of the United States is to say, unless Assad initiates a “peaceful, inclusive transition” to democracy, we’ll boost support for armed militias of Islamic extremists, none of whom have any legitimacy with the Syrian people or any intention of setting up an inclusive democracy post-Assad.

Also consider the geo-politics of Kerry’s visit to the authoritarian regime in Saudi Arabia. There were two main issues brought up in the press conference: (1) regime change in Syria, and (2) threatening Iran by warning that “time is running out” for a political settlement on their civilian nuclear program.

Kerry’s visit was a perfect example of how the United States lays prostrate at the foot of the Saudi Kingdom. The two issues discussed are really designed to signal to the Saudis that the US will subordinate itself to their interests, which are to undermine the two main Shiite powerhouses in the region, Syria and Iran, for the sake of Sunni-Saudi regional hegemony.

Syria expert Joshua Landis said it quite well in a recent talk: “We defeated Hitler because we denied him oil. And I think that lesson really sunk in in the security establishment. Planning for a third world war after the Second World War was always about denying oil. And that’s why the Persian Gulf is so important. If China were to go on the war path, or anybody else, we could turn it off. So it’s not only [about] guaranteeing the free flow of oil to our friends, but guaranteeing that we have our hand on the spigot, so we can turn it off to our enemies. [That’s] what is driving national interests.”

45 thoughts on “US, Saudi Arabia Stand United for Democracy in Syria?”